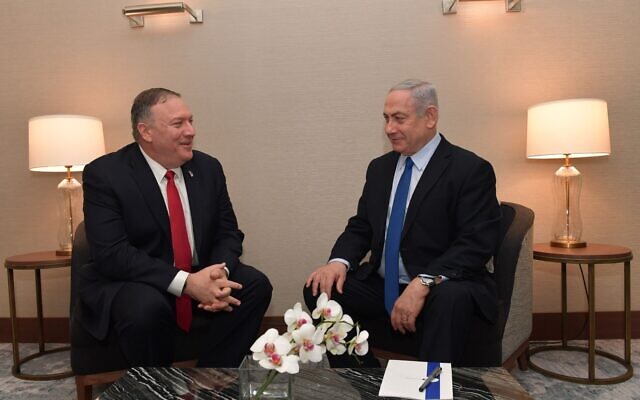 Israeli Prime Minister Benjamin Netanyahu asserted on Sunday that he had discussed the possibility of annexing the Jordan Valley and other parts of the West Bank with US Secretary of State Mike Pompeo during a meeting held in Portugal’s capital of Lisbon last week, Israeli local media reported.

After Saturday’s US State Department denial about discussing annexation with Netanyahu, the Isareli PM declared at a conference on Sunday that he wants American recognition for Israeli sovereignty in the Jordan Valley, adding that Israel has a “great opportunity” to achieve it, along with securing an Israeli-US mutual defence pact.

Referring to the West Bank, he said that “it is time to apply Israeli sovereignty in the Jordan Valley and to regularise all communities in Judea and Samaria, those in the blocs and those outside them. They will be part of the State of Israel.”

“It was said that we had not discussed a formal plan and that was true, but the issue was raised and I raised it with Secretary of State Pompeo and I intend to raise the issue with the Trump administration,” he confirmed.

Regarding the situation in Gaza Netanyahu said that if there is a need for military operation in the strip, adding that there will be no settlement in case of continued rocket fire from Gaza against Israel.

Commenting on the PM’s statement, the International Criminal Court’s prosecutor Fatou Bensouda said that she is following the Israeli proposal with “concern.”

On Thursday, Netanyahu stated that he had discussed the issue of annexation with Pompeo. However, they do not talk about timetables. The statement was denied by US officials later on Sunday.

The Assistant Secretary for Near Eastern Affairs David Schenker, denied the annexation plan, saying that “there was no annexation plan, full or partial, for any part of the West Bank presented by Israel to the United States during the meeting.”