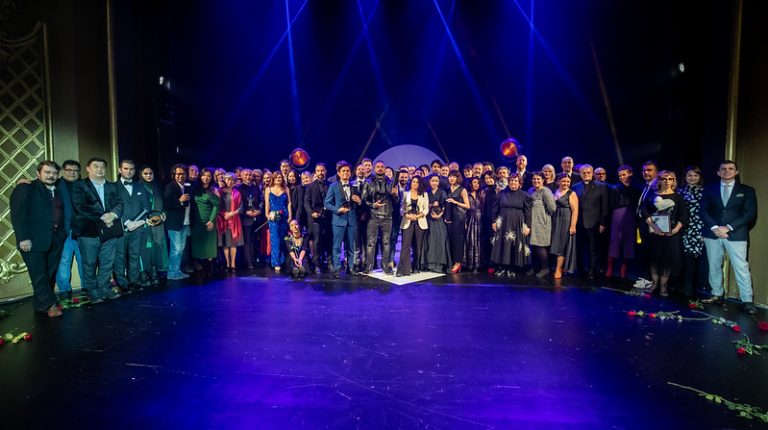 Through the festival’s premiere competition programme, the Official Selection Competition chose the Japanese film Kontora, directed, produced, and written by Actress Anshul Chauhan to win the festival’s Grand Prix, while the Best Music award was given to Yuma Koda.

The film centres on the problematic relationship of a single father and his teenage daughter in economic distress, when a stranger, a mute man who only walks backwards, enters their lives, forcing them to confront their emotional reality.

The jury said that the film offered a powerful mysterious story that links modern Japanese lives with a past that the characters think have been buried and forgotten, but rises up to haunt and obsess them.

The Best Director award of the festival went Filipino Filmmaker Jun Robles Jana for the film, Kalel, a portrait of a 15-year-old teenager in Manila, Philippines, who receives the news that he has HIV and is forced to cope with the gradual falling apart of his family.

“Working with a large cast of mostly very young actors, the directors has made a film which feels deeply rooted in the everyday lives of its characters,” the jury said on choosing the film.

“His film pulls away from the sticking-plaster from the wound of the AIDS epidemic among young people of the Philippines and exposes the terror and violence that this crisis imposes on them. It’s a passionate and concerned film about lives we never see in the West,” the jury added.

The Best Actress Award went to Roma film and theatre Actress and Writer Alina Serban for the film, Gipsy Queen for the portrayal of a single mother of two, struggling to take odd jobs as she gets an unexpected chance of returning to the boxing ring, a career she had quit years ago. The physical and mental transformation was also behind Actor Clavan Clerking’s Best Actor prize for his role in the UK thriller Muscle.

The film Golden Voices, a tale of two Russian Jewish voice actors emigrating to Jerusalem at the beginning of 1990s, received two awards, Best Script for Evgeny Ruman, who is also the director of the film, and Writer and Cinematographer Ziv Berkovich, and the Network for the Promotion of Asian Cinema (NETPAC) award.

The jury said that they awarded Ruman the prize for telling a vivid and gripping story through real and relatable characters. Right from the opening scene, you fall in love with the characters and get intrigued by what’s in store for them. It stands out simply for telling a unique story in a balanced and compelling way.

Iranian director Narges Abyar and winner of the Official Selection’s Best Director award in 2016 for her film Breath, received the festival’s Audience Award for Official Selection entry for her film, When the Moon was Full, closely beating two other audience favourites – the previously mentioned Golden Voices and Fiela’s Child.

Director Wayne Wang’s Coming Home Again received the Best Cinematographer award for its Director of Photography Richard Wong. On this decision, the jury said they gave the prize to Wong “for his ability to translate into images the tension and the drama of the story with an elegant minimalism, framing through narrow spaces, both physical and metaphorical, representing the despair of the characters with a discrete eye and delivering a bold vision of what cinematography should be.”

At the awards ceremony, jury President Newell described the difficult decision-making process as all the 21 films in competition had their merits, naming four more films that he wished to highlight: The Flying Circus by Albanian director Fatos Berisha, Monster by Irish Director Tom Sullivan, Drowsy City by Vietnamese director Dung Luong Dinh, and When the Moon Was Full by Abyar.

In the First Feature Competition, the jury handed the Best Film award to Stories from the Chestnut Woods by Director Gregor Bozic, an exquisitely shot collection of stories set in a rural area on the border of Italy and Slovenia during the difficult years after the Second World War.

The first Special Prize went to the Brazilian film The Seeker for a script which depicts a woman and a man living in a community of liberals on the stressful visit to the girl’s wealthy parents. The family is in crisis as the patriarchal head of the family has gotten himself into a corruption crisis.

The second Special Prize went to the Bolivia-Qatar-Canada production, The Names of the Flowers for the cinematography of Nicolas Taborga. The film, directed by Bahman Tavoosi, is a multi-layered drama about the impact of the Che Guevara’s cult on a small community in Bolivia.

Selecting their favourite also from amongst the First Feature Competition, the International Film Critics Association (FIPRESCI)- jury selected the British film Looted by Director Rene Pannevis as their favourite.

Through Rebels with a Cause, the section for films breaking cinematic rules and expanding artistic boundaries, the Rebels with their Shorts awards were handed to the short film The Silence of the Dying Fish by Director Vasilis Kekatos and Feast by Chinese Director Yunxing Nie.