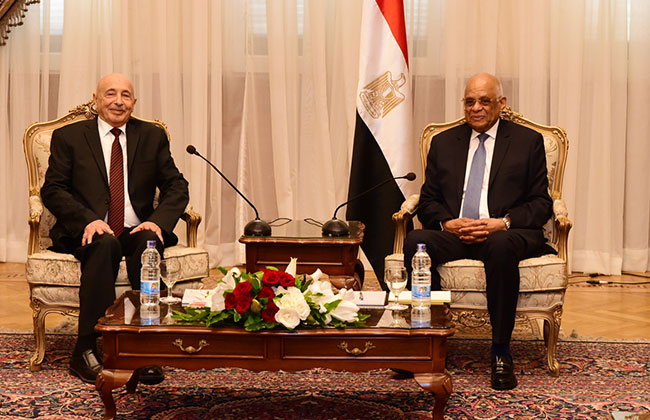 The President of the Libyan House of Representatives Aguila Saleh Issa arrived to Cairo on Monday to meet with his Egyptian counterpart Ali Abdel Aal, and the Head of the Arab Parliament Meshal Al-Salami before heading to Greece, according to a Libyan parliament spokesperson.

The talks will tackle the implications of the recently signed agreements between Turkey and Libya’s United Nations backed-Government of National Accord (GNA) on Libya and Egypt.

Issa, who is an alley to the head of Libyan National Army (LNA) commander Khalifa Haftar, will urge the Arab Parliament and Egypt to push for the withdrawing of the international recognition of the GNA, saying that it does not serve the Libyan people’s interests, the spokesperson added.

The GNA was formed in 2015 and is recognised by the international community, headed by Fayez Al-Sarraj.

On Monday, Abdel Aal renewed Egypt’s support for the Libyan parliament and its speaker Issa and also to the LNA in “its battles against terrorism in Libya.”

During a hearing in parliament, Abdel Aal said Egypt’s government, leadership, and people will never stand idly by to whoever threatens its interest or allow any foreign country to mess in its western borders with Libya. His remarks followed an urgent statement by Egyptian Member of Parliament (MP) Mostafa Bakry over the agreements.

The two memorandums of understanding (MoUs) on maritime boundaries, security, and military cooperation between Turkey and GNA have sparked Mediterranean tensions and were condemned by Egypt, Cyprus, and Greece.

On Friday, Greek Foreign Minister Nikos Dendias said that they expelled the Libyan ambassador for failing to send the contents of the GNA and Turkey maritime and military agreements.

The ministry insisted that it views the MoUs as “violations to the international maritime law and oppression to the navigation rights to the Greek islands.”

Last week, Dendias visited Cairo and met with his Egyptian counterpart Sameh Shoukry to discuss the MoUs between Turkey and GNA and other issues of common interest.

Dendias said in an earlier interview that Greece exercises sovereignty over its maritime zones, which are also European maritime zones under international law, as reflected in the United Nations Convention on the Law of the Sea.

Tensions have been escalating in recent months between Turkey and Cyprus because of Turkey’s unauthorized drilling in the Eastern Mediterranean.