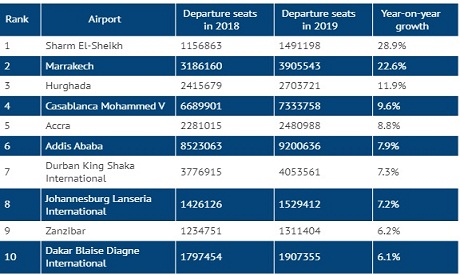 It said Sharm El Sheikh airport is the fastest growing major airport in Africa by capacity.

The study indicated that Sharm El Sheikh airport’s capacity has increased by 28.9% in 2019, providing 1.49m available departure seats rather than 1.16m departure seats in 2018. While Hurghada airport came  third on the top ten list, recording a growth rate of 11.9% this year, as its capacity growth has increased, reaching more than double the number of seats in 2016.

Sharm El Sheikh airport tops the list, showing that it has recovered greatly after the crash of the Russian Metrojet flight 9268 in Sinai four years ago. After taking-off from Sharm El-Sheikh airport the flight  was destroyed, likely by a bomb on board, and left no survivors from the 224 passengers and crew.

Although the incident lead to a drop in tourism starting 2015, Egypt was able to recover, tightening security procedures in Egyptian airports, which encouraged the British government to lift its four-year ban on air travel to the Red Sea governorates in October 2019.

Routesonline is responsible for organising and operating world-renowned airline and airport networking events through its annual World Route development forum. They are held in key markets throughout the year in Asia, Europe, and the Americas.

Nesma Airlines targets 23.6% growth passenger traffic to and from Egypt in 2019: CEO