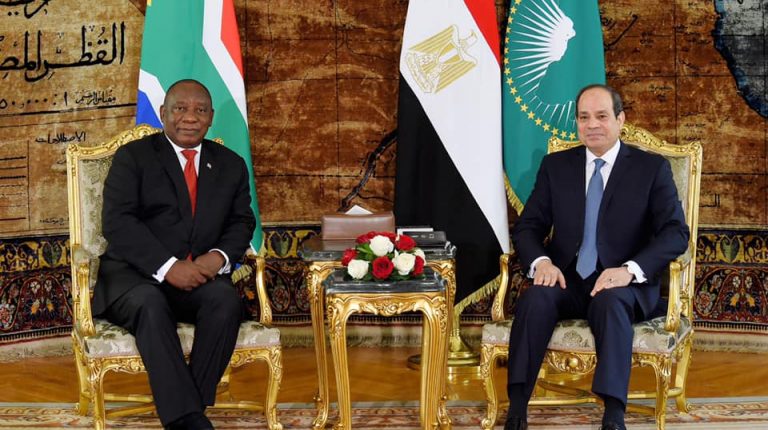 Al-Sisi and Ramaphosa held bilateral talks that involved senior officials from both countries to discuss strategic political and economic cooperation.

The two leaders then held a press conference where Al-Sisi said that he and Ramaphosa exchanged views over regional and international issues of common interest. Al-Sisi mentioned the two countries’ intention to increase trade exchange and promote investments between Egypt and South Africa.

The pair also agreed on intensifying political consultations and coordination between the two countries on urgent issues concerning Africa as well as maintaining security and peace in the continent to reach peaceful settlements in all conflicts.

Ramaphosa is scheduled to take part in the inaugural session of the Aswan Forum for Sustainable Peace and Development on 11 December, according to South African government.

The Aswan Forum for Sustainable Peace and Development is to be held on Wednesday and Thursday with “an agenda for sustainable peace, security, and development in Africa.”

Egypt and South Africa have strengthened their economic relations over recent years. According to the South African government website, “trade data indicate that bilateral trade exchange between South Africa and Egypt between 2014 and 2018 has been on a growth trajectory.”