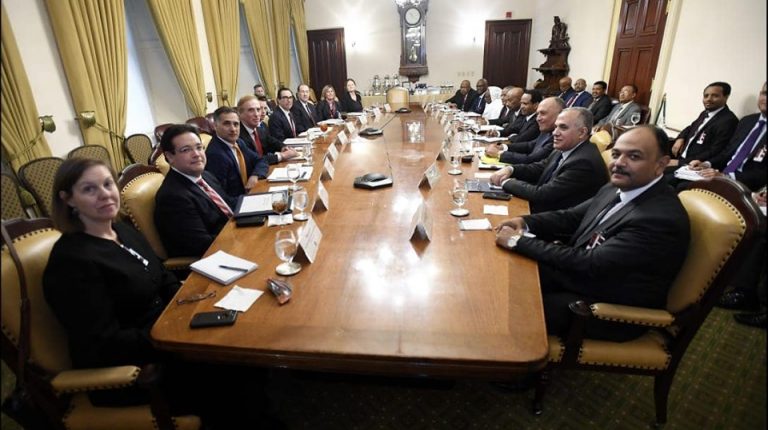 The foreign and irrigation ministers of Egypt, Ethiopia, and Sudan agreed that the next two trilateral technical meetings on the Grand Ethiopian Renaissance Dam (GERD) should evolve around the development of technical rules and guidelines for the filling and operation of the dam, according to a joint statement issued on Monday.

The ministers of the three countries have met in Washington under the auspices of the US Department of the Treasury and with the participation of the World Bank.

The participating ministers announced that “a progress has been achieved in the technical meetings among the ministers of water resources in Addis Ababa and Cairo,” the statement added.

Meanwhile, the foreign ministers of Egypt, Ethiopia, and Sudan appreciated the role of the United States and the World Bank as observers, noting that they look forward to reconvening in Washington on 13 January to review the results of the upcoming technical meetings in Khartoum and Addis Ababa to finalise an agreement in this regard, the statement continued.

Later, Egyptian foreign and irrigation ministers issued a joint statement in which they emphasised the significance of the involvement of Egypt, Sudan, and Ethiopia with good faith and transparency in the talks, and to ensure the implementation of the 2015 Declaration of Principles Agreement in a manner that help Ethiopia generate electricity without harming Egypt’s share of Nile River.

Mohamed Nasr Eldin Allam, Egypt’s former irrigation minister, said the joint statement of Washington meeting pointed out that the two upcoming meetings in Khartoum and Addis Ababa will focus on the filling and operation rules of the dam taking into account the natural reserves of the Blue Nile in accordance with the international agreements of transboundary rivers and the international law.

“This step is a success and will put negotiations on the right track, and this is what Egypt called for from the beginning,” Allam wrote on Facebook.

Yet, he added, this statement does not mean reaching a solution for the dispute, as this will depend on the flexibility of the negotiators and the role of observers.

On the other hand, Egypt’s Foreign Minister Sameh Shoukry met with his American counterpart Mike Pompeo on Monday. The pair discussed promoting strategic relations between Egypt and the US, and also exchanged views over regional issues of common interest.

Shoukry and Pompeo reviewed the updates in the GERD negotiations, where the Egyptian official expressed his desire to reach a fair and balanced agreement on the operation and filing of the dam, according to the Egyptian foreign ministry.

“I had a productive meeting today with Egypt’s Foreign Minister Sameh Shoukry on ways our strategic partnership can help achieve greater regional security and prosperity,” Pompeo tweeted on Monday.

The upcoming technical negotiations between the irrigation ministers of the three countries are scheduled in Khartoum on 21-22 December.

A week ago, the ministers of irrigations of Sudan, Egypt, and Ethiopia held talks in Cairo in the presence of observers from the US and the World Bank.

Egypt has sought an international meditation after talks with Ethiopia reached a “deadlock” in October.

In November, Egypt, Ethiopia, and Sudan agreed to continue talks over the disputed GERD and reach a deal by 15 January 2020.

Egypt depends on the Nile for more than 70% of its water supply for drinking, industry, and agriculture, and it is concerned that the GERD will shrink its share of Nile water and cause “harm” to its people.

The dispute between Egypt and Ethiopia is basically on the period of filling the GERD’s reservoir.

Ethiopia insisted on its rights in development, seeking to make the GERD the largest hydropower project in Africa. The dam, of which 70% have already been established, is expected to generate more than 6,000MW by 2021.