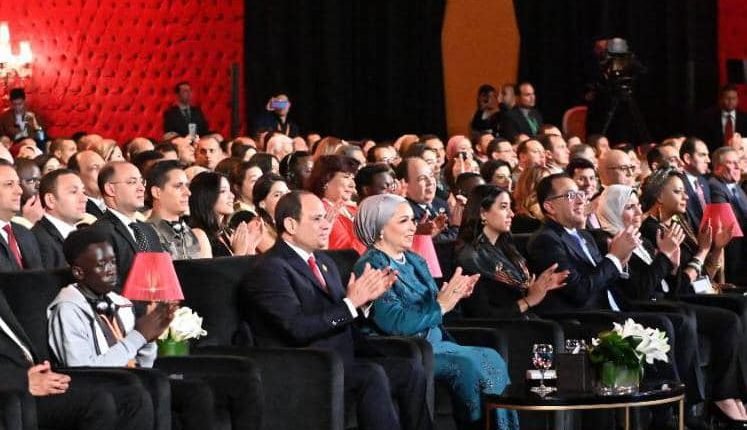 President Abdel Fattah Al-Sisi inaugurated on Saturday night the 3rd edition of the World Youth Forum, a state-sponsored platform that hosts hundreds of young people from all over the world to attend workshops, learning sessions, and meet world officials.

According to the description of the forum on its website it “engages youth globally in an enriching set-up, allowing them to exchange views and recommend initiatives to decision-makers and influential figures.”

The much-celebrated forum is held in the heavily fortified and posh city of Sharm El-Sheikh in South Sinai, a common destination for the Egyptian state to hold international events and conferences.

On Saturday morning, the Egyptian president paid a visit to the King Salman International University’s branch in Sharm El-Sheikh, accompanied with several ministers, according to the presidency’s spokesperson Bassam Rady.

The university was agreed upon in 2015 when Saudi King Salman visited Cairo, and its construction started in July 2017. It’s expected to be completed by March 2020.

According to Rady, the university will be divided into three branches; Sharm El-Sheikh, Ras Sidr, and El-Tor.

The forum’s administration announced this year’s WYT was held under the title “Art Reviving Humanity” that reflects the content of the various theatrical shows set to be presented.

The WYT was launched upon Al-Sisi’s directives in 2017 to hold a workshop that discusses various issues through arts, and gathers young people from around the world to show their talents in different fields.

Several pre-forum workshops took place on Friday, including a workshop on “Youth’s Perspective on Tackling Global & Regional Security Challenges” which discusses and aims to “help world youth understand global and regional security issues in depth in order to know how their actions affect and influence their community.”

Another workshop, named “International Food Security: Youth’s Initiative for Action” was held tackling the context where all people always have the right to physical, social, and economic access to sufficient, safe, and nutritious food. The forum also included a session to discuss “Steps to Successful Business Launch” which was held by the American University in Cairo (AUC) Venture Lab, a University-based startup incubator and accelerator.

Over the weekend, the forum was praised by pro-state newspapers as a channel between the Egyptian decision-makers and young people, however, critics say the state needs to put more effort to enhance the situation of political participation and freedom of expression.

In November, Egypt submitted the Universal Periodic Review (UPR) at the Human Rights Council in Geneva, receiving criticism about human rights in the country. However, Egypt accepted recommendations to improve its human rights record during previous UPR cycles.

During the first edition of the forum, a Detained Youth Committee was established based on recommendations made after veteran politician Osama Al-Ghazali Harb called on the president to release young detainees. Thousands have been released since then, usually during national and religious holidays. Several politicians and members of the civil society hope these releases to include detainees arrested on politically related charges.

The Egyptian state has put extensive efforts into sponsoring and administering these conferences, starting 2017, both acting a channel for the government to present and reiterate its goals and achievements, and to report on its interaction with the youth. The forum is heavily attended by members of the Presidential Leadership Program (PLP) which was established by the Egyptian presidency to graduate “future leaders”. Indeed, some of the newly appointed deputy governors were graduates of the programme, in which they studies governance, security-related issues, and administration.

2020 is the year of sustainability on Arab stock exchanges: AFE’s Secretary General