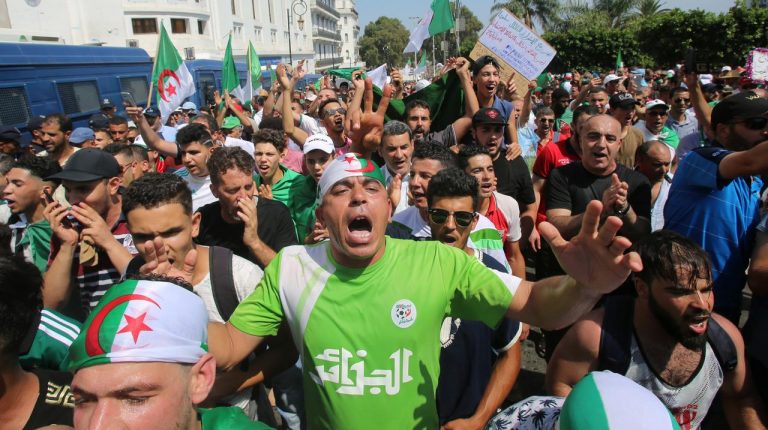 A nationwide mass protests gripped Algerian streets once again, with protests vowing to keep up the demonstrations against all the ruling elite, following the win of former Prime Minister Abdelmadjid Tebboune in the presidential election.

On Friday, protesters took to the streets again rejecting the results of the elections, chanting “The vote is rigged. Your elections are of no concern to us and your president will not govern us.”

Tebboune announced his readiness to conciliate with the protesters saying that he would “extend his hand to the Hirak (the Algerian protests) for a dialogue to build a new Algeria.”

During his first news conference after the election’s results, he vowed to launch a consultation aiming at drawing a new constitution that would be put for voting in a referendum. He also promised to introduce reforms to reduce spending on imports.

Meanwhile the protesters criticised Tebboune’s son who was arrested in an influence-peddling case involving several senior officials caught up in a cocaine trafficking scandal. However, his supporters said that his son’s detention is reason enough to believe in his commitment to the independence of the judiciary.

On the other hand, France’s president Emmanuel Macron urged Tebboune to establish a real dialogue with protesting populations. Commenting on Macron’s statement, Tebboune was quoted by Xinhua as saying, “I have no comment, he (Macron) is free to market the goods he wants in his country, I only recognise the Algerian people.”

“Algeria is a pivotal country in Africa, the Mediterranean and the Arab world and our international relations are based on the principle of reciprocity, as we do not accept dictations from any country, nor do we accept interfering in Algeria’s domestic affairs,” he added.