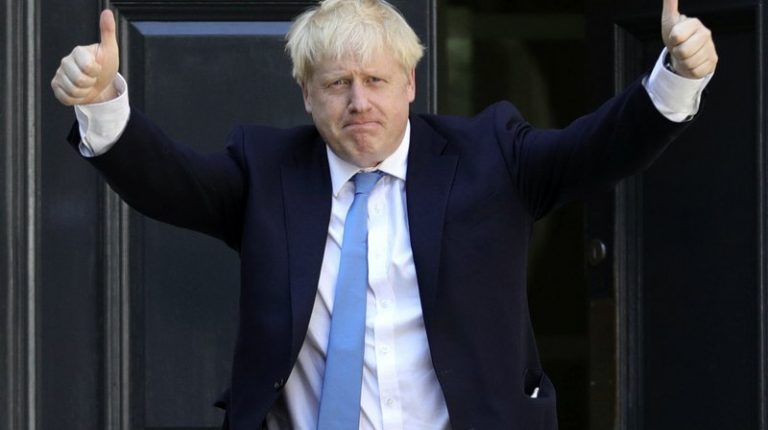 The British Prime Minister Boris Johnson is scheduled to visit the north of England, the traditional heartland of the Labour Party, following the celebration of his party’s biggest election win for 30 years, securing the majority in the House of Commons.

In Thursday’s elections, the Conservative party swept aside the Labour in a big defeat that led the Labour’s leader Jeremy Corbyn to announce that this is his last year leading the party in a general election.

The conservatives have achieved their biggest victory after getting 365 seats in the general elections, winning the Commons majority of 80 seats. On the other hand, the conservatives’ traditional rival, the Labour party suffered its worst election result since the 1930s, getting 203 seats.

The prime minister is expected to announce a minor government re-shuffle as early as Monday. On Tuesday, the members of parliament (MPs) will return to Westminster and begin the process of swearing in.

Johnson has also vowed to reintroduce his Withdrawal Agreement Bill to Parliament before Christmas, which could happen by the end of next week, stressing that his victory in the election is a mandate for Brexit on 31 January 2020.

Despite the victory of Johnston who is the biggest supporter for the Brexit deal, the Brexit Party itself has failed to win any of the Westminster seats.

Labour’s leader Jeremy Corbyn said that he did everything he could do to get Labour into power, promising not to leave  until another leader is elected to lead the party, which is likely to be done next year.

“I’ve done everything I could to lead this party… and since I became leader the membership has more than doubled and the party has developed a very serious, radical, but serious and fully-costed manifesto,” he said according to British media.

He also expressed sadness over the outcome of the elections describing it as “taken over by Brexit”.

Corbyn was also requested by Lord Blunkett, a former Labour cabinet minister, to apologise for the defeat.

Following Johnson’s election victory, protests took place at Westminster on Friday, carrying signs that read “Defy Tory Rule” and “No to Boris Johnson”. The British police has arrested two of the participants.

Trump tweeted, “Congratulations to Boris Johnson on his great WIN! Britain and the United States will now be free to strike a massive new Trade Deal after BREXIT. This deal has the potential to be far bigger and more lucrative than any deal that could be made with the E.U. Celebrate Boris!”