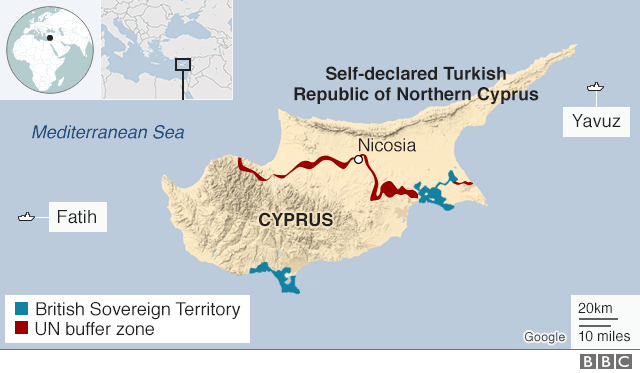 The Prime Ministry of the Turkish Republic of Northern Cyprus (TRNC) allowed the Turkish air forces to have a military base for the drones to accompany the Turkish ships in their energy exploration in the Eastern Mediterranean.

The move is believed to increase tensions in the region between Turkey and the European Union (EU).

In a statement on Friday evening, TRNC Prime Ministry announced its approval for Turkey’s use Gecitkale Airport for unmanned aerial vehicle (UAV) flights starting 16 December 2019. The airport is located in the eastern coastal city of Magusa (Famagusta).

“In light of developments in the Eastern Mediterranean region, and at the request of the Turkish Cypriot Peace Forces Command, the TRNC government is allowing for activities of UAVs at Gecitkale Airport to protect Turkey’s and the TRNC’s legitimate rights and interests,” the statement said.

Cyprus has been divided into two countries since 1974, following a coup aiming at Cyprus’ annexation by Greece. This Greek attempt led to a Turkish military intervention forming the Turkish Cyprus on the northern third of the island, and the Greek Cyprus in the southern two thirds.

While the Greek Republic of Cyprus is internationally recognised and an EU member, the TRNC is recognised only by Ankara.

In February 2018, five Turkish warships blocked a rig belonging to the Italian energy firm ENI from processing its operations searching for gas in the area of eastern Mediterranean in the regional waters of Cyprus.

In October 2018, the Turkish drillship Fatih started its first drilling campaign in the Eastern Mediterranean, in a move which increased tensions between Turkey which is ruling the northern part of Cyprus, and Greece, and Cyprus over offshore oil and gas rights.