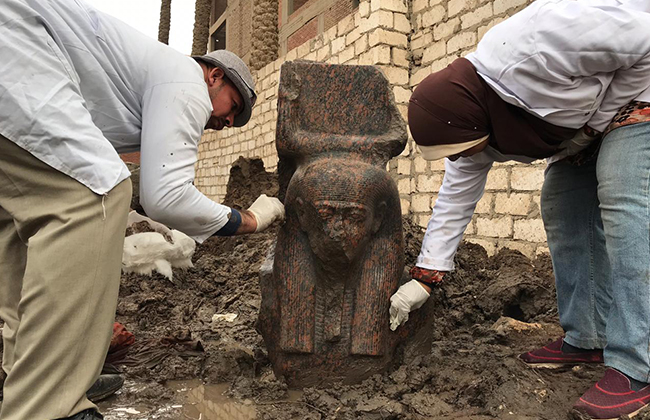 The ministry announced on Thursday unearthing a unique, big, red granite statue of king Ramses II, at a privately owned land in Mit Rahina, near Saqqara. The discovery came few days after the ministry discovered 19 giant granite blocks that are believed to be a part of ancient Egyptian god of craftsmen Ptah’s temple at the same place.

The ministry started the excavation in the land after its owner was caught digging deep in search of the antiquities.

The statue was found decorated with the shape of “Ka”, an ancient symbol representing power, life force and spirit.

The excavation revealed only the upper part of the statue, and the remains are believed to be still buried under ground water.

Mostafa Waziri, secretary-general of the Supreme Council of Antiquities said in a press release that the statue is extremely unique and rare, explaining that the only discovered statue showcasing a king with the “Ka” symbol belonged to a 13th Dynasty King named Hor Awibre, and it is currently on display at the Egyptian Museum.

The unearthed bust is 105 cm tall, 55 cm wide, and 45 cm thick. It depicts King Ramses II with a wig, while its back is engraved with the words “The Beloved of Maat’s strong bull.

The statue, along with the pink granite blocks which were unearthed last week depicting Ptah, the demiurge of Memphis, while performing Sed Festival rituals, were transformed to Mit Rahina Open Museum for restoration. The studies indicate that, so far, the blocks are the remains of the Ptah royal temple.

Only a day later, the Ministry of Health managed to seize 135 antiquities hidden at a Kidney dialysis centre in Beni Suef governorate.

The ministry stumbled upon the relics in a field visit to the centre. Waziri said that the found relics are not a part of the Ministry of Antiquities’ listed artefacts of the museums or storages. “So, most likely they come as a result of illegal digging,” he added.

The antiquities include 122 coins dating back to various eras, as well as a number of badly preserved statues that were found in a bad condition. The statue mostly depicted human faces, and was made of mud bricks. A separated wooden box was also found. However, its existence date was not yet detected.