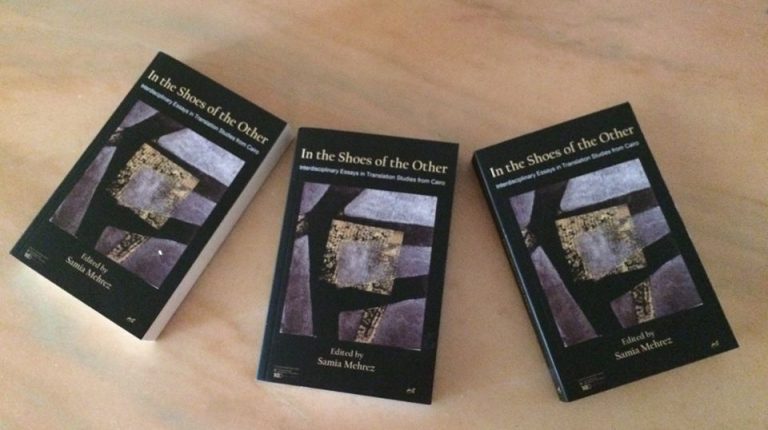 Celebrating ten years of enriching the translation world with some of the most remarkable publications, lectures, and discussion panels, the American University in Cairo’s (AUC) Center for Translation Studies at the School of Humanities and Social Sciences published an anthology book last week.

The book titled, “In the Shoes of the Other: Interdisciplinary Essays in Translation from Cairo,” is edited by the veteran translator Samia Mehrez, the founding director of the Center for Translation Studies at AUC.

In her book, Mehrez chronicles the centre’s decade journey through which she firstly fought for its establishment, until the place where it currently stands as one of Egypt’s most leading pillars in Egypt’s translation scene.

“Ten years seemed like an appropriate moment to celebrate its accomplishments and to honour the lecturers who sustained its life for the past ten years. This anthology of interdisciplinary essays in translation studies is precisely that,” Mehrez said in the book’s introduction.

In her speech, Mehrez expressed the affect the 25 January Revolution had on the centre, stating that “the revolutional energy that accompanied the early years at the centre infused it with a determination to resist and persist despite institutional and budgetary constraints. In doing so, it has opened up uncharted territory beyond the confines of academic programmes and has widened the parameters of its engagement with translation, as well as its regional and global networks.”

The book is a compilation of the testimonies, essays, and personal noted by scholars, practitioners, activists, and artists from Egypt and the world who focus on Arabic and translation who were also lecturers at the centre.

Mehrez explained throughout the chapters that, “the contributors explore problems of translation including Arabization and Egyptianization of texts, as well as the challenges, constraints, and opportunities provided through their creative adaptation within the target context. Problems of translating for the stage, Arabic renditions of Ibsen’s plays, Shakespeare in colloquial Egyptian Arabic, and translations of Walt Disney films and lyrics are among the topics discussed in this section.”

The book is divided into six chapters: The Translator: Memories, Testimonies and Reflections; Translation, Migration, and Identity; Literary Translation: Challenges and Opportunities; On Carrying Across: Languages, Cultures, and Registers; Translation Across Disciplines; The Stage, the Screen, and the Languages In Between.

Despite focusing on separate topics under the umbrella of translation, each cluster’s writers wrap their experience relating to a theme.

“The essays included in each cluster make sense together because they focus on a broadly defined theme but, as readers engage with the anthology, they will also find important connections and interrelated issues across the different clusters,” Mehrez explained.

Denys Johnson-Davies, late renowned translator of Naguib Mahfouz and Tayeb Saleh’s works is among the writers of the book