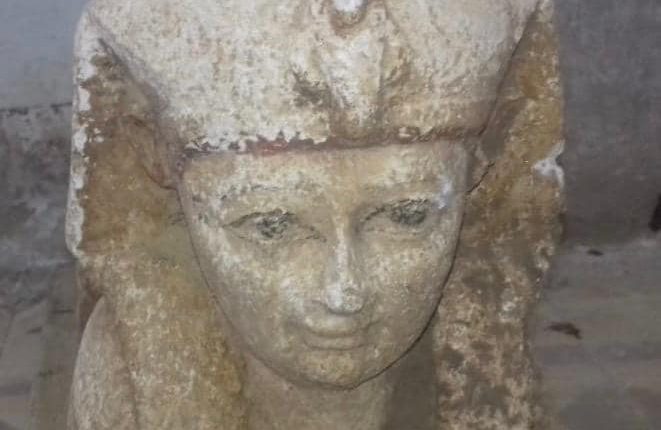 While the most famed, giant Sphinx gloriously stands still at the Giza Plateau, attracting all the astonishment, and fighting for decades to remain as close to one of the world’s seven wonders, hundreds of miniature sphinx statues remain as fascinating as the giant one is, and only waiting to see the light. A limestone royal Sphinx was unearthed on Saturday at Tuna El-Gebel archaeological area in Minya governorate, Upper Egypt.

The uncovered Sphinx is 35cm in height and 55cm in width. The sharply engraved statue was found through an Egyptian excavation mission working in an area of in which digging is not yet complete.

Director General of the Antiquities of Middle Egypt Gamal El-Samastawy said in a statement that the statue is well carved and shows very clear and beautiful facial features.

“This reflects the professionalism of the ancient Egyptian artists,” he added.

The archaeological site, Tuna El-Gebel, was previously the necropolis of Egypt’s 15th nome during the late new kingdom and the beginning of the new intermediate period.

The mission also unearthed a number of blue amulets that depict Bes, the ancient Egyptian god of protecting households, mothers, children, and childbirth. Bes is the male counterpart of highly worshipped goddess Beset. Bes was usually portrayed in carvings and inscriptions as a lion rearing up on its hind legs.

Despite not announcing the date in which the Sphinx belongs, Bes was often worn as amulets after the Third Intermediate Period of ancient Egyptian civilisation. Bes amulets were usually worn to fight off evil. He was believed to take actions in pushing away evil spirit through killing snakes, fighting off evil spirits, watching after children, and aiding women in labour.

The mission also discovered a number of pottery vessels different in sizes and shapes buried along the Sphinx and amulets, as well as an alabaster pot.

One of the ministry’s biggest discoveries this year, took place at Tuna El Gebel archaeological site where an Egyptian mission unearthed 40 Ptolemaic-era mummies that were found inside cemeteries, of which 10 belonged to children, while the remaining 30 belonged to both men and women.

In 2017, the archaeological site also surprised the world with an uncovered cemetery that dates back to the late period, containing 17 non-royal mummies buried inside, which were discovered at the beginning of the digging process before finding the rest of the cemetery. At their excavation process, the team also found a number of Roman funerary houses carved in clay, in which they also found a collection of different coins, lamps, and other domestic unearthed collections.