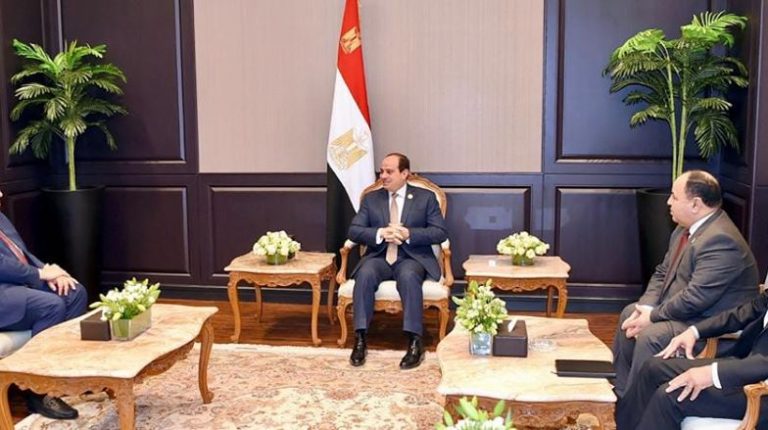 The meeting addressed ways to upgrade cooperation between Egypt and the World Bank Group to support the government’s efforts to develop local industry, attract foreign investment, and cooperate in the new and renewable energy sector and digital economy.

During the meeting, Al-Sisi stressed the positive and fruitful cooperation between Egypt and the WB, which has an important role in supporting the development efforts in Egypt, according to a statement from the presidency.

For his part, Mohieldin noted that Egypt succeeded in overcoming the various challenges that the country faced during the past years.

He said that this came through implementing a comprehensive programme for economic reform, which reflected in achieving positive results such as raising growth rates, reducing budget deficit, as well as decreasing unemployment rates and declining inflation.

It also showed in implementing a package of major national projects that contributed to advancing development efforts and attracting foreign investments, making Egypt a successful model in achieving security and stability.

Moreover, the president met with Qu Dongyu, the director-general of the Food and Agriculture Organization of the United Nations (FAO), to discuss topics in mutual cooperation, as well as ways to enhance development cooperation between Egypt, African countries, and the organisation.

Al-Sisi hailed the distinguished cooperation relations between Egypt and the FAO in food security and safety, and agricultural development, affirming Egypt’s keenness to strengthen these relations, and push them forward, in light of Egypt’s Vision 2030 to improve the agricultural sector and achieve food security.

For his part, Dongyu praised the ongoing cooperation between the FAO and Egypt, stressing commitment to support new projects in Egypt in line with the Egyptian priorities.