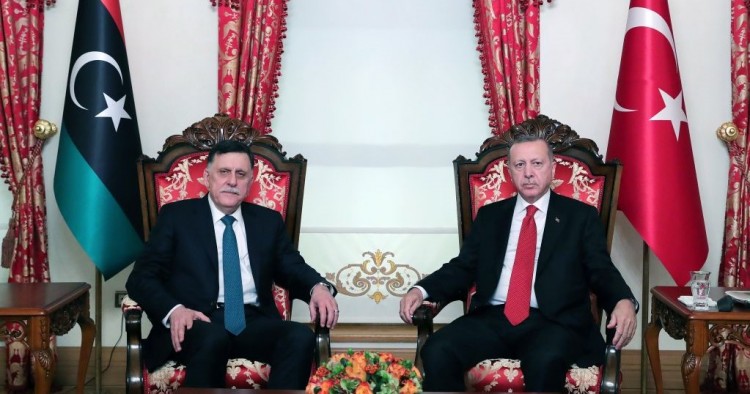 The closed-door meeting, which was not on Erdogan’s official agenda, came days after he announced that Turkey is ready to send troops to Libya if asked, escalating the already tense situation in the Mediterranean region.

In a previous meeting between Erdogan and Al Sarraj, they signed an agreement for security and military co-operation, and maritime jurisdiction. The agreement has raised international condemnation.

When asked about Sunday’s meeting, Erdogan said that Turkey alone decides the initiatives it takes, even if the GNA asked for Turkish troops, adding that he had already announced his readiness to provide all kinds of support to Libya.

In another indication of the rapprochement between both countries, Ankara also announced it will allow Libyans under the age of 16 and over the age of 55 to enter its territory without visas.

Meanwhile the GNA has stated that the Emir of Qatar Sheikh Tamim bin Hamad Al Thani has declared Doha’s readiness to provide both economic and security support for the Libyan GNA.

The Emir’s comments came during a meeting with Al Sarraj in Doha. He asserted that Qatar will “double its efforts, so that Libya can overcome the crisis it is going through.”

On the other hand, the disputed Turkey-GNA deal allows provision of training, consultancy, experience transfer, planning, and material support by Turkey, if requested. It also stipulates the establishment of a joint office of defence and security cooperation in Turkey and Libya.

“Upon invitation of the receiving party, providing training and consultancy services concerning joint military planning, experience transfer, training and education activities, and weapon systems and equipment utilisation covering the fields of activity of the Land/Naval/Air Forces within the body of their Armed Forces within the borders of Parties,” the agreement reads. The agreement is valid for three years with automatic renewal for one year.