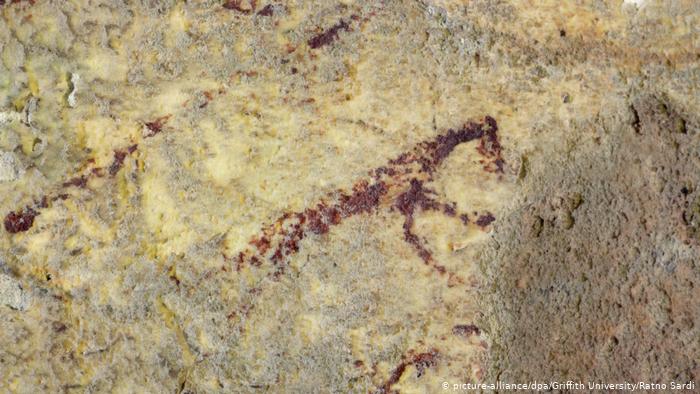 A new study by archaeologists working on the Sulawesi cave painting says it is also the world’s oldest example of storytelling. The painting reveals an artistically advanced society with its own folklore and spirituality.

A new study published on Thursday has found that 44,000-year-old cave paintings in Indonesia may not only be the oldest figurative artwork, but also the oldest example of pictorial storytelling.

The paintings, depicting human-like figures using spears and ropes to hunt wild boar, were discovered in 2017 on the Indonesian island of Sulawesi. A team of Australian and Indonesian researchers have now published their initial findings in the journal Nature.

“The portrayal of multiple hunters confronting at least two separate prey species possibly suggests a game drive, a communal hunt in which animals are indiscriminately flushed from cover and directed towards waiting hunters,” the scientists wrote.

The hunters in question appear to be therianthropes, or humans with animal characteristics. Until now, the oldest piece of art thought to depict these characteristics is a 40,000-year-old ivory figure found in a cave in Germany that includes a human body with a feline head.

“Therianthropes occur in folklore or narrative fiction of almost every modern society and they are perceived as gods, spirits, or ancestral beings in many religions worldwide,” said study co-author Adam Brumm, an archaeologist at Australia’s Griffith University.

Since the 1950s, hundreds of sites of cave paintings have been found in the Indonesian regions of Sulawesi and Borneo, challenging the idea that the painting originated in Europe. For comparison, the famous cave paintings in Lascaux, France, are only 17,000 years old.

Although the Sulawesi painting is in poor condition, the researchers were able to determine that it reveals an artistically advanced culture with its own folklore and spiritual beliefs.

“(The scene) may be regarded not only as the earliest dated figurative art in the world but also as the oldest evidence of communication of a narrative in Palaeolithic art,” they said.

“This is noteworthy, given that the ability to invent fictional stories may have been the last and most crucial stage in the evolutionary history of human language and the development of modern-like patterns of cognition.”