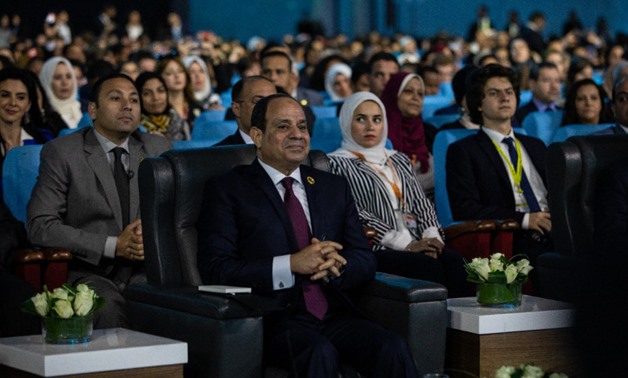 During his participation in the third edition of the World Youth Forum (WYF), President Abdel Fattah Al-Sisi said laws, values, and principals related to modern technology are basically subject to national security considerations and the producing countries’ policies.

During the session titled “Artificial Intelligence and Human Beings: Who Controls?” Al-Sisi said addressing the youth, “you have to catch up with modern technology,” as it will be difficult to keep up with technological advances.

He highlighted that terrorist groups tend to use social media to achieve their goals, asserting the importance of boosting awareness to thwart such malicious schemes.

During the session, the robot ambassador “Sophia” expressed her happiness to attend the forum, saying, “humans and robots do not compete, but complement each other.” She explained that she was created by Hanson Robotics in order “to adapt to the human factor, and I am only three years old.”

Sofia added that robots help achieve goals through analysis and work in different environments without affecting the quality. She added that artificial intelligence can contribute to improving energy efficiency.

Although artificial intelligence benefits from self-learning, robots will not replace humans, so humans should raise robots as well as they raise their children, she explained.

At a different session, titled “Ways to Boost Cooperation Between the Countries of the Mediterranean in the Face of Common Challenges,” Al-Sisi said the current situation in Libya has harmed Egypt, explaining that due to conflicts in worn-torn countries thousands of Egyptian expats have returned home.

He added that Libya is a transit point for undocumented migration and that Egypt’s national security is tied to Libya, clarifying that Egypt could have intervened, but it respects the sovereignty of Libya.

The session also tackled several issues including the situation in Syria and Lebanon.

Speaking of Syria and Lebanon, Al-Sisi stated that Syria should focus on restoring stability in the country, asserting that “millions of Syrian refugees in all countries will return to Syria, let the people live.”

He also warned of escalating Lebanon’s political situation, confirming that if the situation in Lebanon escalates “the crisis will not just be in Syria, but also in Lebanon, and it will be a bigger problem.”

Meanwhile, Maltese Director-General of Political and EU Affairs, Maria Camilleri Calleja, stressed that despite Malta’s small size, legal and undocumented migrants have been welcomed, pointing out that 35% of school students are foreigners.

Displaying Lebanon’s experience with hosting refugees, Lebanese Minister of National Defense Elias Bou Saab said that Lebanon hosts 500,000 displaced Palestinians and 1.5 million Syrian refugees. When explaining some of the challenges of hosting refugees, he said, “they compose an economic and security burden. Unfortunately, some of them were engaged in trafficking.”

The session was also attended by Cyprus Presidential Commissioner for Humanitarian Issues and Overseas, Fotis Fotiou, who underlined that 73% of Cyprus is occupied by Turkey, stressing the importance of respecting the sovereignty of each state and international law regardless of the size of the military power it possesses.

He asserted that the memorandums of understanding signed by Turkey and the Government of National Accord in Libya, breached international law and maritime laws as Turkey would get access to the economic zone in the Mediterranean exclusively.

“The numbers (of refugees) are large compared to our resources,” Fotiou added, mentioning that Cyprus was the first country to raise the matter of undocumented migration and refugees, calling for remedying the causes of said phenomenon.