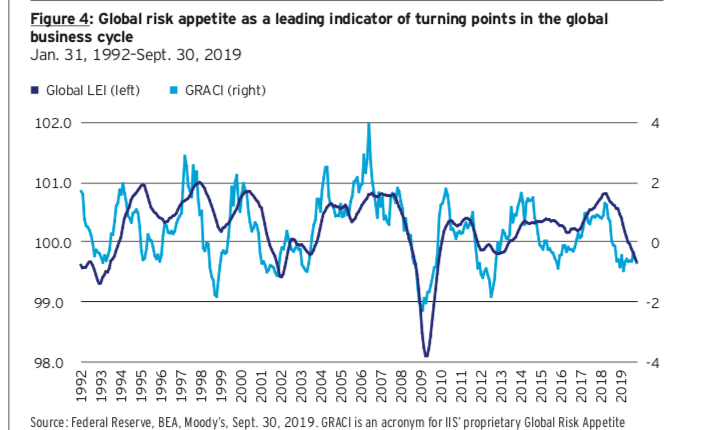 Invesco Investment Solutions believes that over the last ten years since the end of the Global Financial Crisis, the equity markets have experienced a prolonged upswing with relatively subdued volatility, something that is unlikely to be repeated in the next decade. Invesco analysts expect in a recent report that asset returns over the next 10 years to be notably lower and riskier than what experienced over the past 10 years.

Looking forward, they are seeing volatility beginning to trend upward after what has been a long downward trend that bottomed out in early 2018. While volatility levels are now approaching what they would consider more normalised levels, a continued upward trajectory could point to a challenging environment for investors seeking to achieve specifies return targets.

The global economy is rapidly decelerating, and Invesco analysts expect all major regions and countries around the world to grow below trend over the next few quarters, and at least through the first half of 2020.

For the past six months, Invesco’s macro regime framework has indicated that the global business cycle is entering a “contraction” defined as growth below trend and decelerating, as the research firm’s proprietary leading economic indicators (LEIs) have fallen sharply across most regions. This weakness has been most pronounced in the manufacturing sector, with global business surveys and industrial orders sharply deteriorating, due to tensions and uncertainty in global trade policy. In addition, business investments and capex have stalled, denting into long-term growth expectations.

Moreover, Invesco believes it is unlikely for the global economy to see a recession in 2020, but it is may be experienced in some parts of the world. Europe exhibits the weakest cyclical dynamics, and its currency runs the highest recession risk among major economies. Given its high exposures to global trade tensions risk, Brexit uncertainty, and already negative interest rates, Europe has limited room to offset economic shocks.

“Large and coordinated fiscal expansion would be the adequate response to private sector weakness, but such policy seems unlikely to occur before an actual recession. The recent tightening in leading standards fully justifies the renewed European Central Bank’s asset purchase programme, which may help avoid extreme negative downside risk, but we are sceptical of its efficiency in boosting private sector credit demand,” the report added.

On the opposite side, the US has been the most resilient among major economies, but they are starting to see evidence that the global slowdown is affecting the new continent as well, similarly to what have been experienced between 2015-2016, when the rest of the world led the slowdown and the US followed. This contagion is mostly concentrated in the industrial sector, while construction, housing activity, and consumer sentiment remain supported. Given its lower exposure to trade risk and higher exposure to domestic demand, at this stage the risk of US recession in 2020 looks premature.

As for emerging markets, after the steady deceleration of the past two years, Invesco analysts are seeing tentative signs of stabilisation in China, led by improving orders in the industrial sectors. Clearly, the evolution of these cyclical indicators is strongly affected by trade policy developments, but Chinese policy makers have been successfully managing this economic transition, largely.

Based on their indicators, it is too soon to tell whether they are at an inflection point, as the rest of emerging markets ex-China are still decelerating in Asia, Latin America, Europe, the Middle East, and Africa.

In the near term, Invesco analysts expect a convergence in performance in among asset classes, with higher quality assets such as government bonds and investment grade credit to deliver comparable returns and possibly higher risk-adjusted returns than risky assets, despite low yields. On the other hand, early signs of a cyclical turnaround in emerging economies offer the potential for outperformance of emerging equities relative to developed equities in the medium term, a development that would also be consistent with the more favourable long-term return expectations for the asset class.

Moreover, they hold a neutral view on the US dollar in the near term, despite its expensive valuations across macro frameworks. In Invesco’s view, a sustainable dollar depreciation cycle requires a cyclical rebound in growth outside the US, as a catalyst for a major reversal of private capital flows from the US to the rest of the world. Within currency markets, the analysts expect value and carry – the return obtained from holding it – to perform well, particularly in emerging markets, given a stable environment for risk appetite.