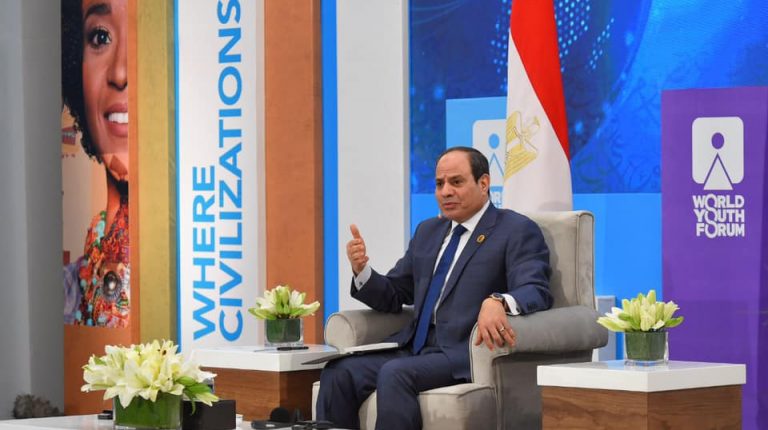 President Abdel Fattah Al-Sisi said on Tuesday that the state is working on pushing youth to be involved in public affairs, expressing hope for the governors and ministers to give the opportunity to younger generations to take positions and support political parties to prepare young political cadres.

During an open session with a number of youths on the sidelines of the third World Youth Forum (WYF) which was held in Sharm El-Sheikh from 14 to 17 December, the president noted that at the beginning of his presidential term, ministers were wondering about the reasons behind his rush to finalise national projects.

“I was insatiable, and they were asking why so urgent? Because I was afraid that us Egyptians could not tolerate the difficult circumstance, if the masses moved, it is hard to stop them,” he said.

Al-Sisi affirmed that Allah (God) has been saving Egypt over the past few years, and this is the reason why it did not fail despite difficulties.

Responding to a question by a Kurdish girl regarding the future of the Kurds in the world, the president said, “During the 70 or 80 years, there was a division between the Kurdish people because of what happened in Syria and Iraq. I have a very calm approach that relies on work and peace. Your identity cannot be taken away from you.”

He added, “Another {people} may come and tell you advice that may encourage you to take revenge on a certain state, but I do not have any tips for you that could lead to the destruction of nations.”

“During the past few years it was possible to build capabilities in health and education instead of conflict…no project succeeds based on killing, but succeeds when it is based on work,” Al-Sisi explained.

He further added that countries that were divided have become fragile and weak, and they do not have the ingredients for success, noting that countries with multiple nationalities can live, but in conditions of justice and fairness.

“Terrorism aims at destroying countries and is incapable of development,” he said, pointing out that Iraq was a stable, strong, and developed country, whose economy is strong, but “what happened there sends a message that if the official in charge of the state makes a mistake, the whole nation will pay the price.”

Regarding Egypt’s role in Africa, the president said that Egypt has positively participated in calming the situation in South Sudan and other conflict regions, stressing that Egypt is an original part of Africa and its role will not stop after the end of Egypt’s presidency over the African Union.