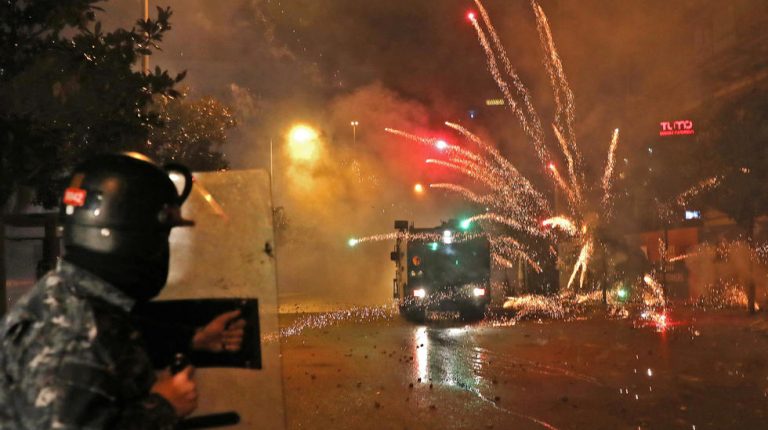 Wide waves of accusations in Lebanon were made, hours after delaying consultations for choosing a new prime minister, amid new violent clashes between the Lebanese army and the supporters of Shi’ite groups Hezbollah and Amal.

“Delaying the consultations is a breach of the Lebanese constitution by both Lebanon’s president Michel Aoun and caretaker premier Saad Al-Hariri”, local Lebanese media reported. However, Hariri’s office has accused the Free Patriotic Movement (FPM) party of ceding its votes to Aoun.

Few hours after announcing the delay, Hariri’s office explained that with FPM giving up its votes, the president can use them as he wishes in the consultations, describing FPM’s move as a breach of the Lebanese Constitution.

Commenting on the accusations, the Lebanese Presidency stated that “President Aoun is keen on abiding by the Constitution, and doesn’t need lessons from anyone,” asserting that those who launch such accusations should abstain from practices that contradict with the text and the spirit of the Constitution.

On the other hand, Al-Jadeed TV reported that the former minister of education Khaled Kabbani, is the new candidate for the PM position, clarifying that his name was suggested by other members of parliament.

Gripping the Lebanese street since 17 October, the peaceful mass anti-government protests took a violent turn this past weekend, when security forces clashed with protesters firing tear gas and rubber bullets in to disper the clashes between protesters and supporters of the Shi’ite groups.

Tuesday has marked new violent clashes between the Lebanese army and supporters of Shi’ite groups Hezbollah and Amal, where troops fired tear gas after supporters tried to break a police cordon in the capital Beirut, according to Lebanese local media.

In a response to a video that offended Shi’ite figures, the supporters of the Shi’ite groups tried to storm a square in central Beirut where demonstrators had pitched tents, trying to clash with the protesters.

Close to the main road linking eastern and western sections of Beirut, dozens of youth burnt tyres and several cars, and smashed office buildings, while hundreds of youth arrived on motorcycles in downtown Beirut waving their party flags. They chanted “Shi’ite”, setting fires to tyres, in addition to throwing stones and fireworks at security forces.

Although Tuesday’s violence indicated a wide sectarian difference, the demonstrators’ tents in Lebanon’s squares were targeted by Shi’ite supporters over the past weeks.

Meanwhile, in Saida, a Sunni populated city in southern Lebanon, dozens of masked people stormed into a main square where the protesters gathered, setting tents on fire.