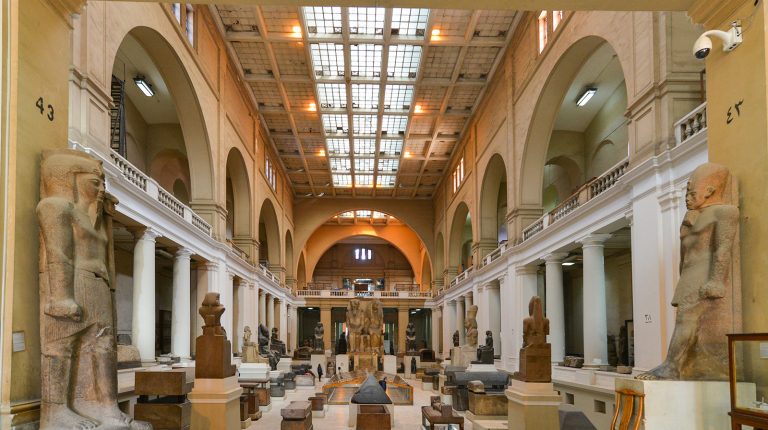 Chronicling decades of excavations that saw the light with the help of French archaeologists, Egypt’s Ministry of Antiquities inaugurated on Wednesday a temporary exhibition displaying several rare, astonishing relics that were unearthed by French archaeological missions in Egypt over the years.

The exhibition, titled “French excavations in Egypt: Research, Cooperation, and Innovation,” takes place at the Egyptian Museum in Tahrir Square. Set to run for two months, the exhibition is organised by the Ministry of Antiquities in cooperation with the French Institute of Oriental Archaeology (IFAO).

The exhibition is part of the Egyptian-French cultural activities. It displays 100 antiquities; some of which are among the country’s most distinguished discoveries including a large collection of papyrus that belong to the Khufu’s era, the second king of the 4th Dynasty. The papyrus collection is considered the oldest ever discovered of its kind in the Egyptian history.

The showcased antiquities date back to different ancient ears starting from the old kingdom. It also includes the rare limestone of Teti, the first pharaoh of the 6th Dynasty.

The French embassy in Cairo stated in a press release that the exhibition highlights the French active steps in the field of Egyptian archaeology, focusing on the current excavation plans and missions.

The exhibition spotlights the French mission’s status quo in exploring the unearthed artefacts.

Noteworthy, France has established three permanent research centres in Egypt; IFAO, which will soon celebrate its 140th anniversary, the French-Egyptian Center for the Study of the Temples of Karnak (CFEETK), and the Centre d’Études Alexandrines (CEAlex). This is in addition to about 50 annual excavation missions launched in cooperation with the Egyptian Ministry of Antiquities.