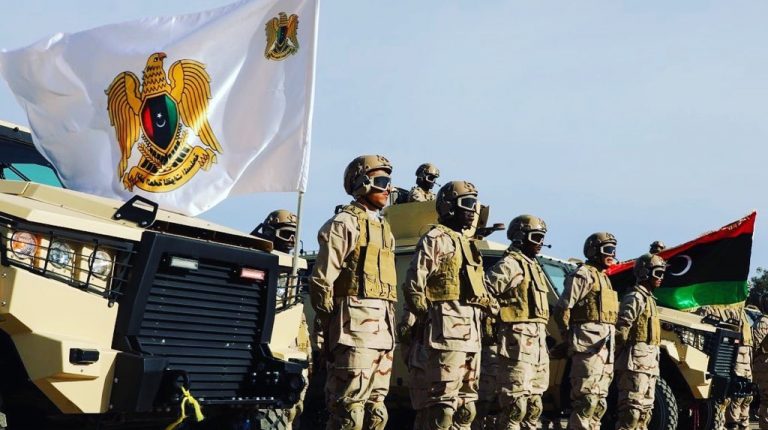 The eastern-based Libyan Arab Armed Forces (LAAF), headed by Khalifa Haftar, has announced that they will confront the “Turkish invasion” in Libya with force.

Ahmed Al-Mismari, a spokesperson for the LAAF, said during a press conference last Friday that “19 terrorists were killed in an airstrike in Sirte, including 11 Syrian nationals.”

Al-Mismari accused Turkey of “transferring the terrorists of Islamic State (IS) and Al-Nusra to Libya,” saying that the LAAF bombed sites used for storing Turkish weapons in Misrata and used by militias allied to the UN-backed Government of National Accord (GNA).

Tarek Fahmy, professor of Political Science at Cairo University, told Daily News Egypt on Saturday that the scenarios of conflict are potentially more than those of negotiation, as Turkey’s deals with the GNA will not only escalate tensions between the GNA and Haftar but also in the Eastern Mediterranean.

Fahmy said that Turkey is trying to change the rules of the game, especially that Ankara has no maritime boundaries with Libya.

He explained that Turkey only owns 12 nautical miles under the 1982 Agreement on the Law of the Sea, the United Nations Convention, and its annexes governing the positions of riparian states. But with its new accord with Libya, Turkey plans to have 200-nautical-mile borders with the Libyan side.

“Sending Turkish troops to the GNA will be a major escalation in Libya, and would fuel the conflict between the GNA and Haftar,” Fahmy noted.

Earlier, Al-Mismari said that the LAAF gave Misrata militias 72 hours to withdraw from the Libyan cities of Tripoli and Sirte. The deadline ends on Sunday.

Fighting escalated in Libya after the GNA decreed last Thursday to activate its military and security deals with Turkey which were signed on 27 November. The activation opens the door toward a potential deployment of Turkish troops to Libya. Turkey’s parliament approved on Saturday the security and military cooperation deal with Libya, state media reported, an agreement that could pave the way for military help from Ankara.

Fayez Al-Sarraj, head of the GNA, called on leaders of five countries; the US, the UK, Italy, Turkey, and Alegria, to activate the deals of security cooperation to fend off Haftar advancement toward the Libyan capital.

Meanwhile, Egypt’s President Abdel Fattah Al-Sisi discussed in a phone call with his Cypriot counterpart Nicos Anastasiades security issues of common interest, and those related to the Mediterranean region.

Earlier, Al-Sisi warned against attempts “to control Libya”, emphasising that Libya security is essential to Egypt. He said during Egypt’s annual World Youth Forum at Sharm El Sheikh that Egypt “will never abandon its support to the LNA.”

Last week, Haftar ordered LAAF troops to advance towards the centre of Tripoli as part of the “final battle” for the capital which was launched in April.

The deals on maritime boundaries, security, and military cooperation between Turkey and the GNA was condemned by Egypt, Cyprus, and Greece.