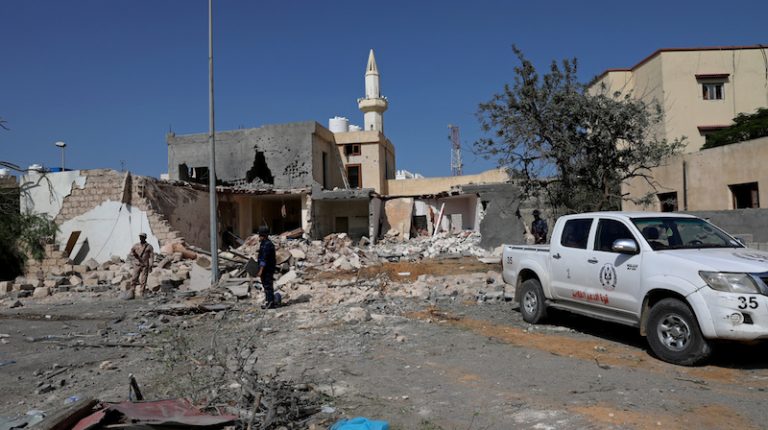 Fighting has been escalating recently in war-torn Libya, as the internationally recognised Government of National Accord (GNA) decreed to activate its military and security deals with Turkey.

This came in response to Khalifa Haftar, who heads the eastern-based Libyan ِArmy’s (LNA), advancement toward Tripoli.

Ahmed Al-Mismari, a spokesperson for the LNA announced on Friday that they bombed what they described as “dangerous targets in Misrata,” including sites used to store Turkish supplied weapons.

Al-Mismari pledged to confront “the Turkish invasion”. Earlier, the LNA gave “Misrata militias” 72 hours to withdraw from Misrata and Sirte which ended on Sunday.

The GNA, headed by Fayez Al-Sarraj, agreed on Thursday following a high-level military meeting, to activate the memorandum of understandings (MoUs) for military and security cooperation signed with Turkey on 27 November.

Al-Sarraj called on leaders of five countries; namely the US, the UK, Italy, Turkey, and Alegria to activate the deals of security cooperation to fend off Haftar’s advancement toward the Libyan capital and to maintain security and stability of the country. 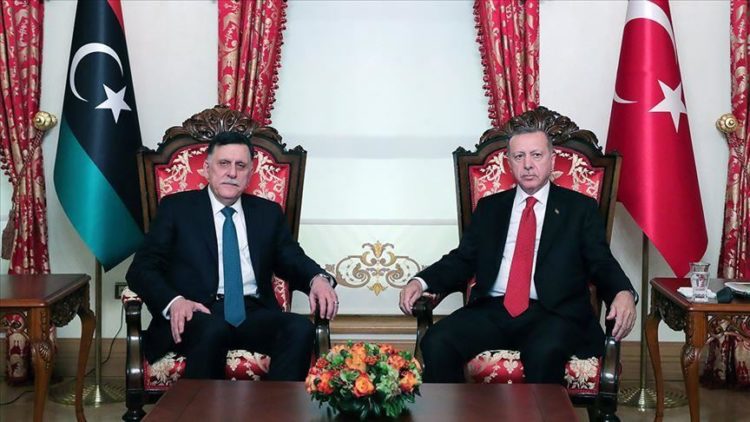 Meanwhile, extensive meetings between Al-Sarraj and Emir of Qatar Tamim bin Hamad as well as other top officials in Doha were held last week. The officials pledged security and economic support to the GNA.

Earlier last week, Haftar ordered to advance toward the centre of Tripoli as part of the “final battle” to control the capital which was launched in April this year. However, since he launched the offensive, the forces failed to control the capital, as they confront GNA allied militias, especially the groups in Misrata.

Libya has remained in chaos, divided between two governments since the fall of Muammar Al-Gaddafi in 2011. The oil-rich country has been suffering from a financial crisis due to clashes between militias and forces loyal to these governments.

Haftar is backed by the UAE, Egypt, France, and allegedly by private security forces from the Wagner Group of Russia, while Turkey is the GNA’s main supporter.

According to the UN, Ankara has previously provided Al-Sarraj’s government with military equipment, including armoured vehicles and drones, but it would be a major escalation if it sends ground troops to defend Tripoli under its new deals with the GNA. The UAE also provided Haftar with drones, the UN added.

The UN has already denounced the UAE and Turkey and accused the two governments of violating the arms embargo imposed on the parties to the conflict in Libya. 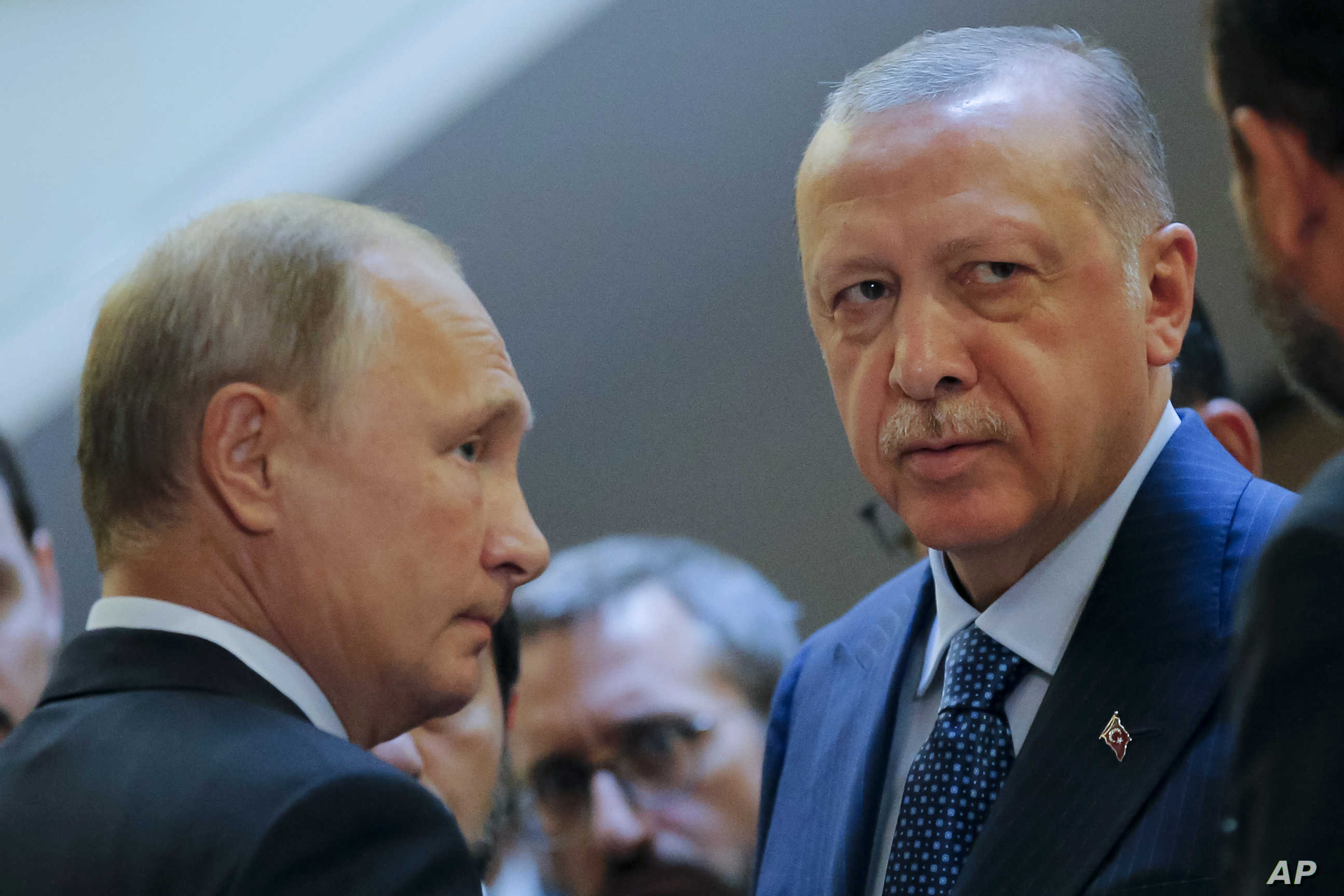 The deals on maritime boundaries, security, and military cooperation between Turkey and GNA came to spark Mediterranean tensions and raise the fears of more escalations in the war-torn country and in the East Mediterranean region.

The accord was condemned by Egypt, Cyprus, and Greece. The deals provide that Turkish troops will be sent to Libya at the request of the GNA.

Turkish President Recep Tayyip Erdogan already pledged to send his soldiers to Libya to support the GNA. He said that the deals will enable joint exploration activities in the Mediterranean.

Erdogan showed up on Friday and said that Turkey will not be silenced “over Russian-backed mercenaries supporting Haftar in Libya.”

For Moscow, it voiced its concern over the Turkish involvement in Libya. Russia said last week that Erdogan and Russian President Vladimir Putin would meet in Turkey in January to discuss Ankara’s potential military deployment to Libya.

“The two agreements signed between Turkey and Tripoli-based administration in Libya, are an attempt by Ankara to break out of its strategic isolation in the Eastern Mediterranean,” Micha’el Tanchum, a senior fellow at the Austrian Institute of European and Security Policy (AIES) told Daily News Egypt.

“Under the principle of equity developed in the international case law deriving from the UN Convention on the Law of the Sea (UNCLOS), Turkey is likely entitled to larger maritime zone because of its long shoreline,” Tanchum remarked.

The deal on maritime boundaries supports Turkey’s stance against Greece and Cyprus amid the ongoing conflict over natural gas exploration in the Mediterranean.

Turkey has been condemned over its unauthorised drilling in the Eastern Mediterranean. Meanwhile, Greece denounced Ankara MoUs with the GNA and emphasised its sovereignty over its maritime zones, which are also European maritime zones under international law, as reflected in the UNCLOS.

Greece also expelled the Libyan ambassador for failing to send the content of the GNA and Turkey maritime and military agreements.

The US voiced its concerns over Turkey’s gas explorations in the waters off Cyprus. While the EU froze most high-level contacts with Turkey and is weighing sanctions.

“The Ankara-Tripoli agreement is dubious on two different grounds. According to the Skhirat agreement through which the GNA government in Tripoli derives its international authority, it cannot make such agreements without the approval of Libya’s House of Representatives (HOR), which now sits in Tobruk. The HOR has officially rejected both agreements with Turkey and declared them invalid,” Tanchum noted.

“Second, the maritime zones defined in the agreement ignore Greece’s island of Crete in direct violation of UNCLOS article 121, under which Crete possesses continental shelf and an exclusive economic zone,” Tanchum said.

“Because of other geopolitical drivers and domestic politics, the parties have been reluctant to take their case to an international tribunal. Instead, Libya and the rest of the Eastern Mediterranean are facing an escalation spiral centred on the battle for Tripoli,” Tanchum said.

He added, “Turkey’s most likely objective is to help the GNA-allied militias battle Haftar’s LNA forces to a stalemate and then seek to strike a bargain with Russia as Turkey has done in Syria.”

“It is unclear Russia would be interested in such a bargain. Further, this scenario assumes that Haftar fails in conquering Tripoli,” he noted.

“That outcome will not only depend on Haftar’s forces but also on the willingness of Russia, Egypt, the UAE, and France, his principal international supporters, to provide the weapons and assistance to ensure the LNA captures Tripoli,” Tanchum concluded.

Aguila Saleh Issa, speaker of the Libya’s House of Representatives visited Cairo almost two weeks ago and urged the Arab Parliament and Egypt to push for withdrawing the GNA’s international recognition which was formed in 2015.

Fahmy said that Turkey is trying to change the game rules, especially that Ankara has no maritime boundaries with Libya.

He explained that Turkey only owns 12 nautical miles under the 1982 Agreement on the Law of the Sea, the United Nations Convention, and its annexes governing the positions of riparian states. But with its new accord with Libya, it plans to have 200 nautical miles with the Libyan side.

None of the condemnations or rejection that were expressed over the Turkey-GNA deals has stopped Turkey from moving on in its plans, he said.

“Sending Turkish troops to the GNA will be a major escalation in Libya and would fuel the conflict between the GNA and Haftar,” Fahmy noted.

“An explosion will take place in the region at any time as tensions escalated,” he pointed out.

Fahmy hailed the Egyptian stance regarding the GNA-Turkey accord, explaining that turkey activities in the Eastern Mediterranean Region enjoyed a “hidden acceptance from the US.”

Meantime, Al-Sisi called on German Chancellor Angela Merkel on Thursday to put an end to “illegitimate external intervention in the Libyan issue.”

Al-Sisi voiced in a phone call Egypt’s support to the unity and security of Libya, as well as efforts to counter terrorism and extremist militias, which not only threaten Libya but also the security and stability of the Middle East and Mediterranean region, he said.

Germany is already working with the UN and preparing a Libyan peace conference in Berlin in the new year, aiming to achieve a ceasefire and to ensure that all parts of conflicts commit to the arms embargo.