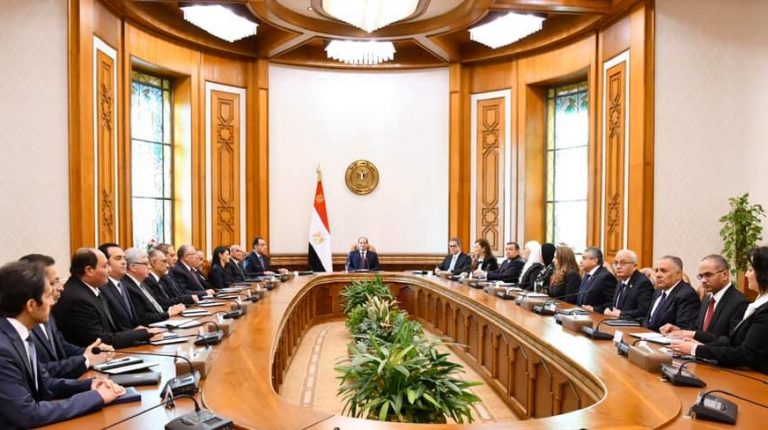 Egypt’s President Abdel Fattah Al-Sisi held a meeting on Sunday with Prime Minister Mostafa Madbouly and the newly-appointed ministers, as well as their deputies, according to the presidency spokesperson.

Earlier, the new ministers were sworn in before Al-Sisi following a limited cabinet reshuffle approved by parliament and included the ministries of social solidarity, civil aviation, justice, and the return of ministry of information.

During the meeting, Al-Sisi emphasised the significance of fighting corruption with all its forms, and commiting to objectivity in appointing human cadres at any ministry or governmental institution.

Al-Sisi also highlighted the priorities of providing citizens with the best services in all sectors, as well as upgrading those sectors.

The president called on all ministers to coordinate with all state bodies to ensure the implementation of the government programmes and plans according to the established timetables.

Furthermore, Al-Sisi stressed the need to commit to transparency and to inform citizens with all challenges facing the country, as well as the updates of the state projects, and efforts of all ministries.

For his part, Madbouly said that all ministers and their deputies are keen on improving the performances of the ministries, affirming that the government seeks to increase production rates, and the implementation of national projects.

Sunday’s reshuffle included some replacements and the merge of two ministries. Some 11 new deputy ministers were appointed at the ministries of telecommunication, health, education, higher education, civil aviation, agriculture, population, and tourism.