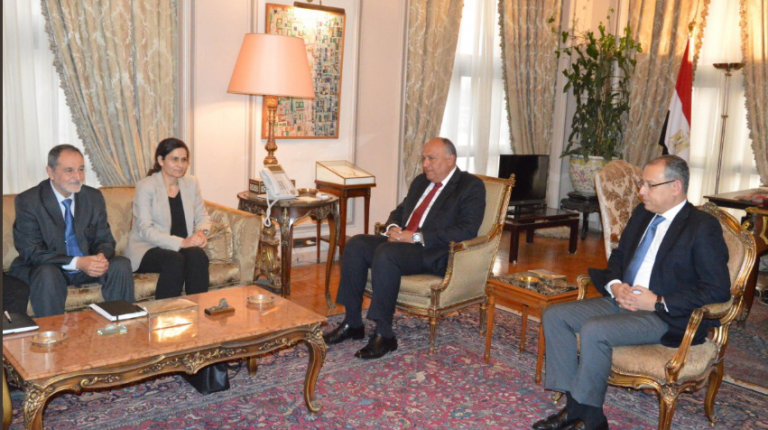 Egypt’s Foreign Minister Sameh Shoukry met on Saturday with a delegation from the Syrian Democratic Council (SDC) led by Ilham Ehmed to discuss political developments in Syria and the humanitarian crisis of the Turkish aggression.

Supporting the political solution to the Syrian crisis, Egypt condemned the Turkish aggression against Syria, declaring its support to the Syrian government and its ability to regain control of Syrian territories. However, Egypt also holds discussions with other parties of conflict.

Expressing Egypt’s rejection of Turkish policies in the region, Shoukry described it as expansionist and dangerous. He asserted that Egypt respects Syrian sovereignty, and supports a political solution to the Syrian crisis.

The Syrian delegation explained that the aggression left many Syrians displaced, in addition to occupying parts of Syrian land, ignoring the sovereignty of Syria, and promising to hold other wider meetings in Cairo in order to activate a joint action to thwart Turkish plans in Syria.

Meanwhile, Shoukry conducted a phone call on Saturday with his Moroccan counterpart Nadder Bourita discussing a number of regional issues of common interest.

The two ministers talked about the situation in Libya, stressing the need of adopting a joint Arab action in order to achieve security and stability in Libya, and outline means to push ahead with efforts aimed at reaching a comprehensive settlement to the Libyan crisis.