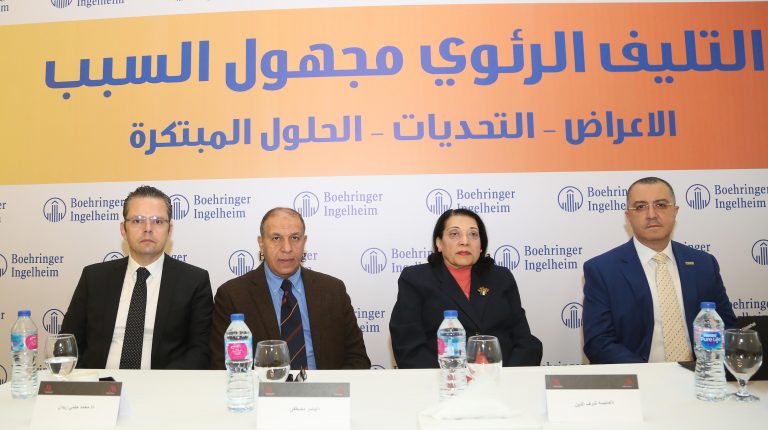 Boehringer Ingelheim, a pharmaceutical company, announced the official launch of its Idiopathic Pulmonary Fibrosis (IPF) treatment in Egypt, after completing its registration at the Ministry of Health and Population.

Maysa Sharaf El Din, professor of Pulmonary Medicine, Faculty of Medicine at Qasr El Aini University and the Former Head of the Department of Pulmonary Medicine at Cairo University said, “It is of great importance to engage the local Egyptian community in awareness and educational initiatives that aim to shed light on the seriousness of IPF, as a rare disease that has an impact on around five million people around the world, and is the cause of higher rates of mortality that range between 70%-80% during the early years following the diagnosis process.”

“IPF is worse than most cancers, after lung and Pancreatic cancer, it also affects around 14-43 people per 100,000 population around the world. In addition, it primarily affects patients over the age of 50, and is more prevalent in males than females. Individuals with IPF may experience symptoms such as breathlessness during activity, a dry and persistent cough, and chest discomfort with a progressive decline in lung function, which directly affects other internal organs. The cause of IPF is unknown, but risk factors may include smoking, lung injury, family history of the disease, abnormal acid reflux, environmental exposures, and chronic viral infections.

Moreover, Mohamed Helmy Zidan, professor of Chest Diseases Department, Faculty of Medicine, Alexandria University said, “There is a large need to find safe and effective solutions that help in changing how IPF is managed. Innovations such as Nintedanib medication is a preferred treatment option, which decreases the risk of acute exacerbations by 68%, and slows the progression of the disease by 50%.w

Boehringer Ingelheim’s General Manager and Head of Human Pharmaceuticals in Egypt, Levant, Iraq and North Africa (LINEA) region, Yasser Farghaly commented, “IPF is responsible for a considerable amount of mortalities worldwide. Boehringer Ingelheim works towards providing a holistic range of advanced treatment innovations that aim to enhance patients’ quality of life in Egypt and around the world.”