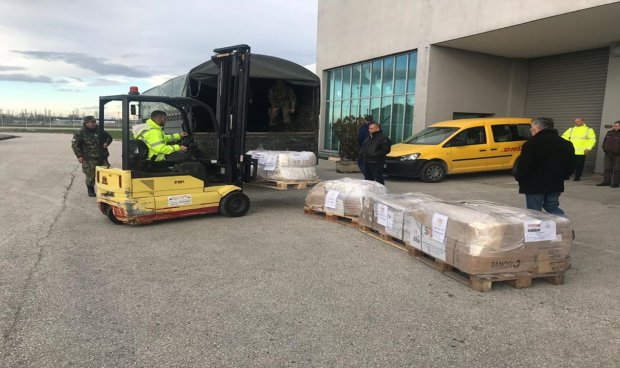 Egypt sent a shipment of pharmaceuticals to Albania on Wednesday, Egyptian embassy in Tirana announced.

Dispatched through the Egyptian Agency of Partnership for Development (EAPD), affiliated to the Foreign Ministry, the shipment was sent to help the Albanian people overcome the damage caused by a devastating quake that rocked the country late November, according to the embassy.

The Egyptian government and its people have always been in support of friendly states, especially in times of crises, the statement quoted embassy officials as saying during the delivery ceremony.

Meanwhile, Albanian officials expressed their appreciation of the Egyptian aid, which reflects the special ties between both countries.

The statement noted that Egypt provided Albania with this shipment of aid to help the Albanian government and people overcome the negative effects and humanitarian challenges caused by the earthquake.

A 6.4-magnitude earthquake hit Albania on November 26, leaving more than 51 people dead and dozens of buildings, apartments, and hotels ruined in the port city of Durres and the nearby town of Thumane.

Since the beginning of the month, dozens of structural engineers from Europe and elsewhere headed to Albania to help rebuild the country after a devastating earthquake last month killed 51 people and destroyed thousands of buildings

The European Union and the United Nations said they coordinated international efforts to assist Albania after the 6.4-magnitude earthquake struck, affecting more than half of the country’s population.

The World Health Organization in Albania was deployed the same day as the quake supporting national health authorities to assess medical needs to adapt to these exceptional circumstances by shifting priorities, and repurposing facilities and personnel, focusing on primary health care. Additionally, a risk communication expert and an Emergency Medical Teams expert were mobilised.

An EU team is leading the damage assessment and distribution of aid. Six EU member states have sent 50 structural engineers, with more to come, to assess the damage with local counterparts.

The quake that hit Albania’s Adriatic coast also injured more than 3,000 people. Authorities gave preliminary figures for 7,900 damaged buildings countrywide and more than 6,000 homeless sheltered in hotels, public buildings, tents and with relatives, while neighboring Kosovo has provided shelter to others.

The quake has affected about 1.9 million people out of the country’s 2.8 million population, according to the EU office in the capital of Tirana.

Albania’s government has called on the international community for financial aid and expert assistance, saying it is incapable of doing it alone.