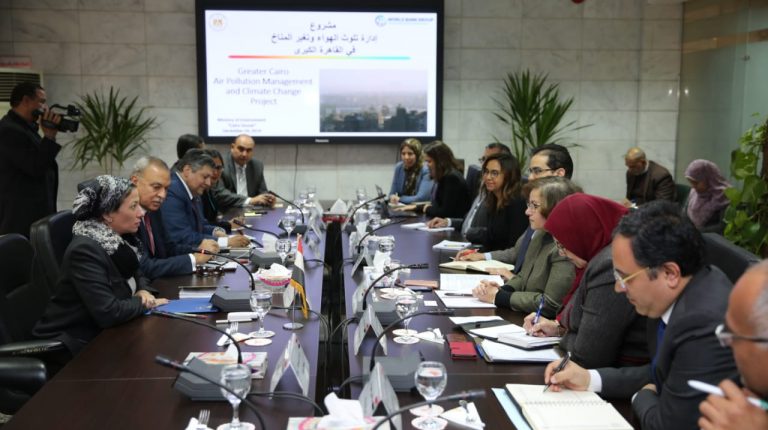 Minister of the Environment Yasmine Fouad discussed on Wednesday with a delegation from the World Bank, the outcomes of the preparatory mission for the Air Pollution Management and Climate Change Management project in Greater Cairo.

Governor of Qalyubia Abdel Hamid Al Hagan, Chairperson of the Public Transport Authority Rizk Ali, and representatives of the ministries of local development and international cooperation have participated in the meeting.

During the meeting, Fouad stressed the importance of the project, especially as it comes in line with the state’s intention to solve the problem of municipal solid waste management in Greater Cairo by supporting the establishment of infrastructure, both technical and financial, to manage the system, in addition to switching to electrical transport by focusing on public transportation.

She further explained that the past period witnessed intensive meetings between the Ministers of Environment, International Cooperation, Local Development, and Transport, and the World Bank to agree on measures to accelerate the preparations of the project, and provide technical studies and data.

The minister pointed out the importance of this project in supporting the state’s plans for the gradual transformation into an electrical transportation system in Egypt through the implementation of a pilot project.

She noted that the Ministry of Environment was working on this topic for nine years through its project to sustain transport in cooperation with the United Nations Development Programme (UNDP).

According to Fouad, the Ministry of Environment has adopted several measures to reduce pollution rates, the most important of which was implemented during the period of combating air pollution this year as well as the completion of the programme’s technical studies, which was one of the largest programmes in the Middle East to preserve the environment.