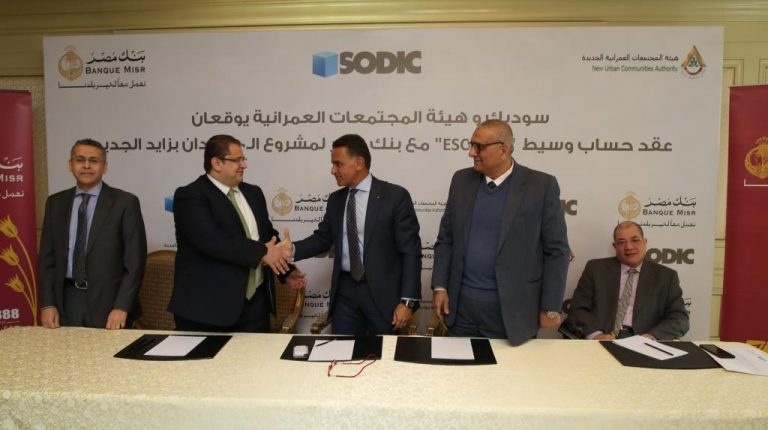 SODIC and New urban Communities Authority (NUCA) have signed an escrow account with Banque Misr for its newest 500 feddan development in New Zayed.

SODIC had signed the partnership agreement for the 500-feddan plot with the NUCA in March 2019. Since then, the company has been awarded the ministerial decree and launched the first neighbourhood of the project “VYE” which achieved over EGP 1bn in booked sales.

Magued Sherif SODIC’s managing director said, “we are very happy to initiate this new banking relationship with Banque Misr, one of the largest and most reputable banks in Egypt. We view this as the beginning of a long-term partnership, and we see many avenues through which we can further grow this cooperation.”

“Banque Misr is continuously developing its products and services to accommodate the client’s changing needs. The bank views clients as partners in success and prioritises client satisfaction in all its dealings,” said Hossam Abdel Wehab, executive vice chairperson at Banque Misr.

Set to become a natural extension to the upscale neighbourhood of Sheikh Zayed, New Zayed enjoys easy and faster access to Cairo’s eastern neighbourhoods and Egypt’s north coast using the newly developed surrounding road network. The up and coming neighbourhood is also set to benefit from the proximity to the Sphinx airport as well as the Grand Egyptian Museum opening which is expected to breathe new life into the whole area.

Palm Hills joins the race to compete for HHD