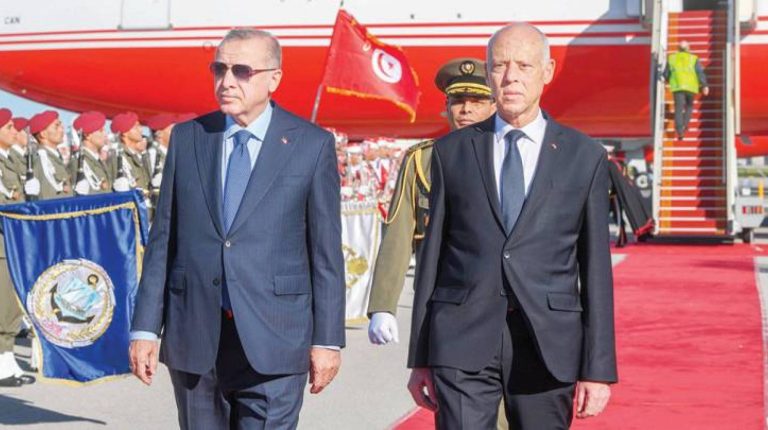 Turkey would prefer to solve the conflict in Libya by negotiations, asserting that a cease-fire in Libya should be declared as soon as possible, Turkish President Recep Tayyip Erdogan said.

Erdogan arrived in Tunisia on an unannounced visit on Wednesday to meet his Tunisian counterpart Kais Saied, in which both presidents will discuss bilateral relations and the situation in Libya.

Speaking about the agreement between Turkey and Libya’s Government of National Accord (GNA), Erdogan said that the Memorandum of Understanding (MoU) with the GNA are preliminary, and the maritime agreement only concerns Turkey and Libya.

“If parliament passes the decision to provide military support to Libya, we will implement it,” he added.

Erdogan asserted that he spoke with the United Kingdom’s Prime Minister Boris Johnson informing him that the participation of Tunisia and Algeria in the Berlin conference about Libya is important.

During the press conference, the Tunisian president said that the discussions with Erdogan will include all aspects of Libya’s situation, stressing that the Turkish-Libyan maritime agreement will not be included in the discussions.

However, it was reported that a high-level delegation from Libya’s GNA headed by Fayez Al-Sarraj had arrived in Tunisia in order to attend the Turkish-Tunisian meeting, according to Al-Arabiya.

On the other hand, Turkey’s presidential spokesperson Ibrahim Kalin said on Tuesday that the Turkish Parliament is working on a bill in order to allow military deployment into Libya

“Turkey will continue to support Libya’s legitimate, internationally recognized government, and will not forsake the Libyan people,” Kalin told reporters following a cabinet meeting at the presidential complex.

Based on the military cooperation agreement with Libya’s GNA, Turkey said it could deploy troops in Libya if it receives such a request.

Kalin added that Turkish support for Libya may come as military training, or other areas, such as political support. However, there is a report by UN experts indicating that Turkey has already sent military supplies to the GNA despite a United Nations arms embargo.

Although Turkey’s President Recep Tayyip Erdogan vowed on Sunday to increase its military support to Libya, if necessary, Ankara announced that the GNA has not yet asked for deploying Turkish troops to Libya.

Speaking about the Russian attacks in Idlib governorate, Kalin said Turkey expects a halt to these attacks as soon as possible through a new cease-fire, after talks with a Turkish delegation in Moscow.

Reuters quoted Kalin as saying that Turkey had asked Russia to establish a ceasefire in the region, adding that attacks in Idlib must stop “immediately.”

Brigadier General Khalid al-Mahjoub, the Director of the Media Centre of the LAAF  was quoted as saying  that the army would escalate its military operation, until ending the battle and controlling the centre of Tripoli, adding that the LAAF is continuing to advance towards Tripoli, as they succeeded to control houses on the opposite side of the Salah Al-Din axis.