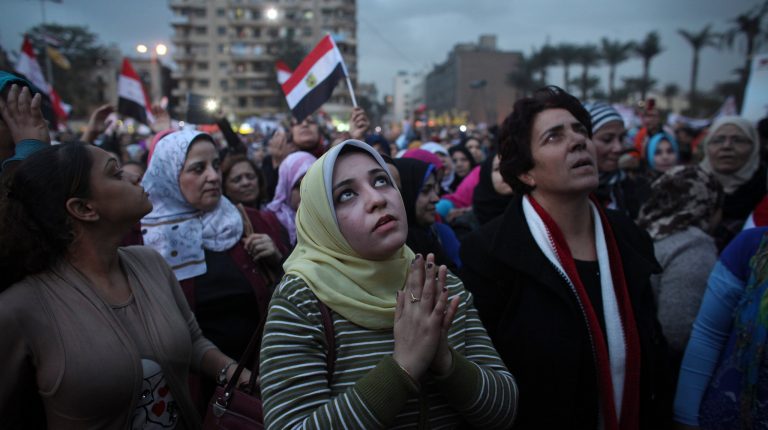 Social progress can be measured by the social position of the female sex.

With the New Year rapidly approaching, this decade is coming to an end. A decade marked by substantial and concrete changes aimed at women`s empowerment. No doubt the state became more aware of the role of women and their impact on economy, working to further strengthen and empower them.

Daily News Egypt presents major stations witnessed in women’s status during the last ten years following the quote,by Karl Marks: “Social progress can be measured by the social position of the female sex.”.

During the first three years of the decade, women faced a lot of challenges, but they fought for their freedom.

Women participated in both the 25th of January and 30th of June uprisings, but unfortunately, both the society and the authority have practiced violence against them.

“Why did she go to the tTahrir square?” A question that women used to receive listen to for almost three years, along with being subjected to different forms of physical and sexual violence. T

The most prominent accident is the accident of “Set EL Banat”, referring to the girl who was subjected to beatings, verbal harassment, and nudity.

After women’s bold participation in the 25th of January revolution, they were dreaming, expecting to become part of the decision-making positions. Yet, time has shown that it was truly just dreams, like those who followed the 1919 revolution and were broken on the ground, mobilised by its masculine atmosphere.

For instance, there were no women present in the committee formed by the military council to make amendments to the Egyptian 1971 constitution.

Unfortunately, the 2012 parliament witnessed a decline in the representation of women, despite what many expected, especially since the figures showed that the 2012 parliamentary elections had the highest female nomination rates in the history of Egyptian parliaments. Despite that there were 984 women nominated, the percentage of representation decreased and recorded only 2.2%. The same happened with the Shura Council elections, in which women represented only 2.7% of the seats.

The Muslim Brotherhood era was the lowest with regards to women`s rights. During their tenure, many parliament representatives from political Islam movement proposed to amend laws that women fought a lot to acquire, claiming that the existing laws at that time were violating the principles of Islam.

Their demands included entirely abolishing the National Council for Women, and the reduction of the custody age to seven years for boys and nine for girls. Also among the proposals was an amendment to the law of criminalising female genital mutilation ( FGM ) to become only prevented outside hospitals, which technically meant supporting FGM. They also cancelled sexual harassment law believing that women are the ones responsible for the harassment because of their clothes.

This parliament was dissolved in June 2012, according to a ruling issued by the Supreme Constitutional Court, which stipulates that some articles of the parliament elections Law are unconstitutional.

After the 30th of June revolution, women were not dreaming of great achievements, but just aspired to have the basic rights they had before the Muslim Brotherhood era.

Thus, it can be said that the period from 2013 to 2015 did not bring about major changes, just regaining of their rights, as well as gradual slow progress in the women`s conditions.

In 2013, after the increase of harassment rates in Egypt, institutions concerned with women’s rights criticised what women are exposed to in the streets of Cairo and some governorates. In response, Egypt`s Ministry of Interior established for the first time in Egypt the Department of violence against womenfv.

Among the gains also was adopting a quota system, after the Parliament’s Law Amendment and Political Rights Committee decided to increase the number of women’s seats in closed lists from three to five, which would at that time ensure higher representation than previous parliaments.

In addition, 26 women were appointed in the judiciary platform, after long struggles in this regard. Besides, woman in the police sector attained the rank of “brigadier.”

In 2015, the National Council for Women (NCW) launched the National Strategy for Combating Violence Against Women (NSVAW). NSVAW was developed in response to decade-long advocacy and struggle of feminist groups, for the state to bear its responsibility in combating gender-based violence through “a comprehensive long-term scheme”. NSVAW addresses violence against women under four headings: prevention, protection, interventions, and prosecution. Each heading comprises a number of sub-goals pertaining to the area of work of 12 different ministries and authorities. NSVAW was to be implemented over the five years 2015-2020.

The year 2016 was full of events that included violence against women, even the gains were a reaction to the losses in which Egypt has increased the penalty for practicing (FGM) to a sentence of between three and 15 years in jail, after the death of Mayar, the girl who died while being subjected to FGM in a hospital in Suez city.

The loses were evident in the decision of the former President of the Radio and Television Union Safa Hijazi to suspend eight Egyptian female TV broadcasters working and transferring them to another department because of their weight gain. She stopped them from broadcasting until they follow a diet for a month to appear on the screen, however the same decision was not taken towards the male presenters who gained weight.

We cannot review the year 2016 without remembering the barrage of abusive statements made by the Parliamentarian Elhamy Augowa. First of which was when he asked women in the Parliament to wear more modest clothes appropriate for the House of Representatives, then he apologised. After a while, he returned to take another abusive stance to support the FGM saying that men in Egypt suffer from sexual weakness, evidencing that Egypt is one of the largest consumers of sexual stimulants. According to him, it`s better for women to support men and resort to FGM, believing that FGM decreases women`s sexual arousal, then he apologised again. Yet, he kept gicving similar statements  and apologies.

The last thing he told the media was that virginity tests for university girls should be implemented, and then he apologised once moreagain!

The year 2017 was the start of a change, in which the government lead by the president began to look towards women, highlighting their role in every political occasion.

The president`s announcement was the first step towards a comprehensive policy launched as the women empowerment strategy 2030.

The NCW signed for the first time an MoU with the CBE pretraining to financial inclusion of women, aiming to see women on the boards of banks, as well.

The parliament also approved an amendment to the inheritance law, which should guarantee inheritance rights for women.

2018 witnessed more bravery from women and girls. It is when they finally decided to talk about sexual harassment. Social media presented many stories for sexual harassment cases in the work place or outside. The most prominent ones were the accident of the journalist who got sexually harassed at work, and the girl who was harassed in the fifth settlement, publishing a video for the incident on social media.

Among the gains in 2018 as well was the appointment for the first time of six female ministers, along with other two female ministers joining them mid –year in the Egyptian cabinet.

For the first time in Egypt, the parliament also approved a law regulating the NCW, bringing it in line with the 2014 constitution and international conventions signed by Egypt.

Among the most prominent provisions stipulated in the law of organising the NCW’s work is that the council is independent, follows the president and enjoys legal constitution, technical, financial and administrative independence in the exercise of its functions, activities, and competences.

Besides, in 2018, Egypt appointed a Christian womanfor the first time ever as Damietta’s female governor.

Also, the Supreme Judicial Council approved the appointment of Hassna’a Shaaban Abdullah, the former vice-president of the Court of Appeals, as the head of the economic court in Tanta, thus becoming the first female judge to preside over a court in Egypt.

As well as Member of Parliament (MP) Nadia Henry, a member of the economic committee in the parliament, announcinged the adoption of the Unified Violence against Women Bill.

Notably, it was launched by human rights and feminist organisations in November 2007 under the name of the”Taskforce for a Unified Act against Violence Against women” and it contains 53 articles divided into seven sections.

2020 is expected to be a year of change, but 2019 was the year paving the role for these changes, as Egypt’s government announced in October that a new personal status law is being prepared by a committee at the Ministry of Justice.

The committee should complete the final draft of the bill by the beginning of 2020, and then it will be sent to the cabinet for approval, before being referred to parliament.

Different suggestions are sent to Al-Azhar to decide if they are relevant to Islam, focusing on some points like the child custody age, visitation rights, and travel permission. They are also tackling polygamy to ensure that the first wife is informed with the new marriage, and that men who remarry without informing their wives are punished with six months’ imprisonment.

Among the suggestions is criminalising customary marriage, in addition to the total cancellation of the articles regulating wives’ obedience.

Al-Azhar, the NCW, the Wafd Party and others have suggested laws covering the engagement period, and regulating financial aspects in case of annulment of the engagement, like the gifts exchanged.

Among the gains in 2019 was the Ministry of Health and Population’s launch of the Women’s Health Initiative for early detection of breast cancer, hypertension, diabetes, osteoporosis and heart disease, targeting around 30 million women above the age of 18.

For the first time in Egyptian syndicates’ history, a woman was elected chairperson of Cairo’s Doctors Syndicate.

On the social side, an Egyptian lawmaker called for a full ban on the niqab, or the face veil in Egypt, reviving a longstanding debate over whether outlawing face veils would be a violation of religious freedom.

Unfortunately, sexual harassment is still present, even among celebrities that people take as idols. Amr Warda, Member of the National football team was initially dismissed from the national team by the Egyptian Football Association (EFA)after he was accused of cyber sexual harassment by a number of women.

Surprisingly, , there were some people who defend his acts, as the expulsion resulted in mixed reactions on social media. While many users praised the EFA for taking a stance against sexual harassment, others defended Warda and accused women of exaggerating the claims made against the footballer. Unfortunately, a lot of the other members of the football team were defending Warda and as a result the EFA later announced that it had accepted his apology and reinstated him to the national football team.

She stated that “You lose part of your femininity if you are fat,” describing obese women as   burdens to their families and the state.

But on a positive note, Egypt’s Supreme Media Council suspended the host.

Through the decade, Egyptian women struggled for their rights, facing a lot of changes, luckily reaped some benefits, but more is yet to come.