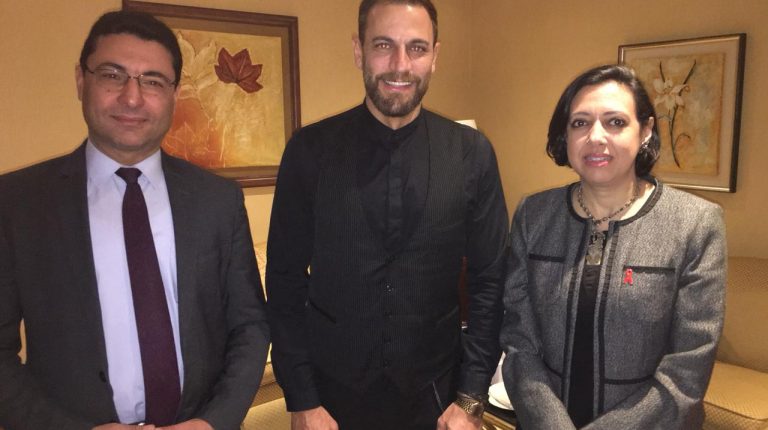 With 0.02% of the population estimated to have human immunodeficiency virus (HIV/AIDS), Egypt is a low-HIV-prevalence country. However, HIV prevalence rates in Egypt have increased six fold in the last few years, compared to 2000.

The percentage of new cases of HIV- positive in Egypt is increasing every year by 20%-30%. In 2019, the average number of new cases of HIV in Egypt was 2470 per year. According to UNAIDS’s 2019 statistics, there are about 13,000 people currently living with HIV in Egypt. However, unsafe behaviors among most-at-risk populations and limited condom usage among the general population place Egypt at risk of a broader epidemic.

Among officially reported cases, people between 25-49 years old are among most-at-risk groups, as sexual intercourse and intravenous drug usage are the primary mode of transmission of HIV in that age. However, recently this category has increased to include younger ages due to drug usage, according to the National AIDS Programme’s (NAP) report issued in November 2019.

Males are seven times more likely to have HIV than females. This may be the case since men conduct tests more than women, as well as the spread of drug usage amongst males.

These statistics point that there may be a concentrated HIV epidemic in Egypt among high-risk groups, but due to social stigma and lack of prevalence data, it is unacknowledged.

Nonetheless, over time, the Egyptian government has made efforts to improve the lives of people with HIV in the country. It launched several initiatives to examine and treat patients in strict secrecy, establishing 14 treatment centres. In 2020, the Egyptian Ministry of Health and Population will launch a campaign to examine pregnant women in maternal and child health centres for HIV.

HIV’s patients have increased in 2019 by 28%, compared to 2010. In addition, 36,000  people are estimated to be HIV-positive in the Middle East and North Africa region, making one of the highest rates of the HIV patients in the world, said Heba Ali, UNAIDS Egypt’s country manager.

In commemoration of the World AIDS Day 2019, she called for “intensifying efforts to eliminate the social stigma of HIV patients,” explaining that UNAIDS’s main goal is leading the global efforts to end HIV by 2030, by supporting Egypt’s national AIDS programme.

As a response to the UN campaign against HIV, Egypt adopted 90-90-90 treatment plan target by 2020. The plan aims at reaching 90% of HIV patients, then 90% of those initiated in treatment, and 90% of those on treatment virally suppressed, by adhering to the treatment course.

Under the auspices of the Ministry of Health and Population, the National AIDS Programme viewed all efforts made by the ministry to combat the disease.

The National AIDS Programme Coordinator Heba El Sayed declared that the number of HIV’s patients registered in Egypt is 13,000 cases since 1986 and the number increases by an average of 20-30% each year.

In 2019, 2470 cases were diagnosed with HIV, and is expected to increase by December 2019 as the programmeme is working now on new cases. El Sayed added that the ministry has provided 14 treatment centers in 14 governorates in Egypt. However, one of the biggest challenges the programmeme faces is stigma and discrimination against patients.

The UNICEF programme in Egypt also addresses HIV by preventing the transmission of HIV from mothers to children. In cooperation with the Health and Population Ministry, they launched an awareness campaign in eight governorates, which managed to target 50,000 women.

Walid Kamal, HIV programme manager at the UN Development Programme (UNDP) in Egypt, declared that since 2008, the Egyptian government started to implement a plan in order to provide all HIV drugs through the Ministry of Health and Population. He added that in 2017, the government managed to support the HIV drugs by 100%.

As a goodwill ambassador of the global campaign to fight HIV, Actor Nicolas Mouawad stated during the conference that it is vital to know the symptoms of the disease and the ways to prevent it due to the large number of HIV cases. He added that awareness campaigns are still needed since people are still afraid of dealing with them.

“It is important to provide psychological support for HIV patients, because having this disease is very harsh. It is linked to behaviors that society condemns such as drugs and sex,” Mouawad stated, asserting that 90% of the infected people are afraid of declaring that they are HIV patients.

He explained that the social stigma pushes HIV patients to the point of pretending to have cancer only to gain people’s sympathy. He clarified that they are at risk of destroying their social relationships if they reveal their actual disease, stressing that everyone is responsible for providing them with both support, health, and preventive education.

According to figures issued by Ministry of Health and Population in 2015, only 4% of young women in Egypt and 7% of young men between the ages of 15 to 24 had accurate knowledge about HIV, adding to the state of disinformation, stigma, and discrimination.

According to UNAIDS’ statistics in 2018, 37.9 million people are estimated to be HIV-positive globally, clarifying that 1.7 million cases were diagnosed only last year, and 770,000  passed away in the same year form HIV-related illnesses.

AUC celebrates 10th anniversary of its Center for Translation Studies