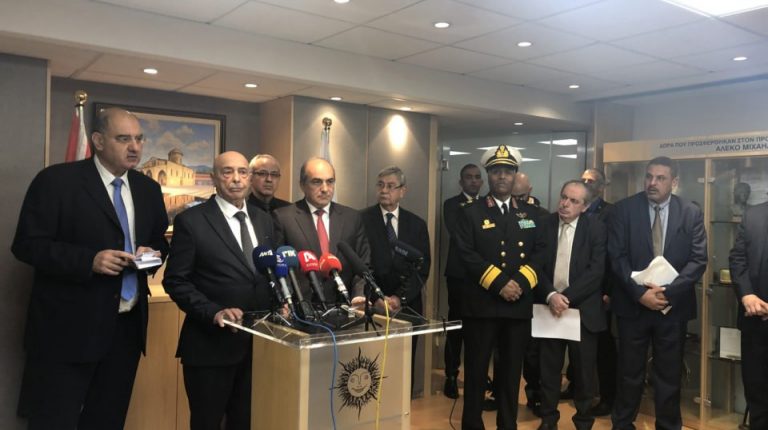 The Turkish parliament is set to meet this Monday to approve the motion to send troops in Libya at the request of Tripoli, one week earlier than it was announced by Turkish President Recep Tayyip Erdogan on 19 December.

Meanwhile the parliaments of Cyprus and Libya on Saturday said that Turkish moves in Libya further escalate the already tensed situation in the Mediterranean area.

During Libyan parliament’s visit to Cyprus, the President of the House of Representative Aguila Saleh Issa met with his Cyprus counterpart Demetris Syllouris, discussing the repercussions of the maritime memorandum of understanding (MOU) signed between Turkey and the Government of National Accord (GNA) earlier this month.

Following Saturday’s meeting, Syllouris and Saleh said in a joint statement that the recent signing of the MOU was “a blatant violation of international law and lacked legal basis, as it ignores the provisions of the UN Convention on the Law of the Sea (UNCLOS) and has not been ratified by the House of Representatives of Libya.”

Opposing the Turkish moves in Libya, the statement said, the moves will “contribute to escalating tensions and destabilising the wider Mediterranean region.” They reaffirmed the “commitment of the two parliaments to the principles of international law, including the UNCLOS. We put as a priority establishing peace and stability in the Mediterranean region.”

Commenting on the Turkish attempts to deploy troops in Libya, both parliament presidents underlined the need to fight terrorism in order to ensure security and stability in Libya. “We consider the Turkish government’s intention to send troops to Libya unacceptable,” they said, adding that this was an interference in the country’s internal affairs.

On the other hand, Egypt’s President Abdel-Fattah Al-Sisi discussed the recent developments in Libya with Russian, American, and Italian top officials in three different phone calls in the past two days.

During his calls with Russian President Vladimir Putin and the Italian Prime Minister Giuseppe Conte, Al-Sisi asserted the importance of joint efforts to end the Libyan crisis through a political settlement, as well as ending the illegal intervention in the Libyan affairs.

He also tackled on Friday’s call with Putin, the terrorist organisations, ways to combat the armed militias, as well as ending the illegal intervention in Libyan affairs.

On Thursday, Al-Sisi also conducted two phone calls with US President Donald Trump and Italy’s Prime Minister Conte, in which he affirmed Egypt’s support for achieving security and stability in Libya, explaining the important role the Libyan Arab Armed Force (LAAF) is playing in order to combat terrorism and undermine the armed militia activities.

Speaking about the Grand Ethiopian Renaissance Dam with Trump, Al-Sisi expressed his appreciation for the efforts made by US backing the tripartite negotiations. In this context, Trump confirmed his interest in successful negotiations in order to reach an agreement that preserves the rights of all parties.

Meanwhile, Italy’s Prime Minister Conte stressed his country’s endeavor to resolve the current situation in order to settle the Libyan crisis. The crisis which was described by Conte as a threat to the security of the entire region.

In a similar context, the Tunisian presidency denied late on Thursday Turkish allegations about   Tunisia’s alliance with the Government of National Accord (GNA).”Tunisia will not accept becoming a member of any alliance,” the presidential statement said.

He stressed that the false statements, interpretations, and allegations that emerged since Wednesday were either due to misunderstanding and misjudgment, or from the same sources carrying out defamation campaigns.

Tunisia also denounced statements made by the Minister of Interior of Libya’s GNA Fathi Bashagha, who said that a Turkish-Tunisian-Algerian alliance was formed to support the Government of National Accord (GNA) in Tripoli.

However, Rachida Ennaiferm, the Media in Charge at the Tunisian Presidency said the country’s stance on the Libyan crisis was neutral and insisted that the country would not participate in any coalition, adding, “We are on alert to prevent Tunisia from turning into a corridor for ISIS.”

Tackling Tripoli’s battle, the fighting between the GNA and the LAAF had intensified in southern Tripoli on Friday, mainly in the Az-Zawiyah city northwestern Libya, in addition to the Airport Road.

The LAAF’s spokesperson Ahmed Al-Mismari said the LAAF is about to reach Tripoli, asserting that the army managed to a take control of Tripoli’s Airport Road, oil tanks, an equestrian bridge, and a transport camp, in the capital, Tripoli.

However, the GNA reports stated that the LAAF’s attempts to penetrate the Airport Road has failed after back-up came to the GNA’s aid, allowing them to keep control of the area.