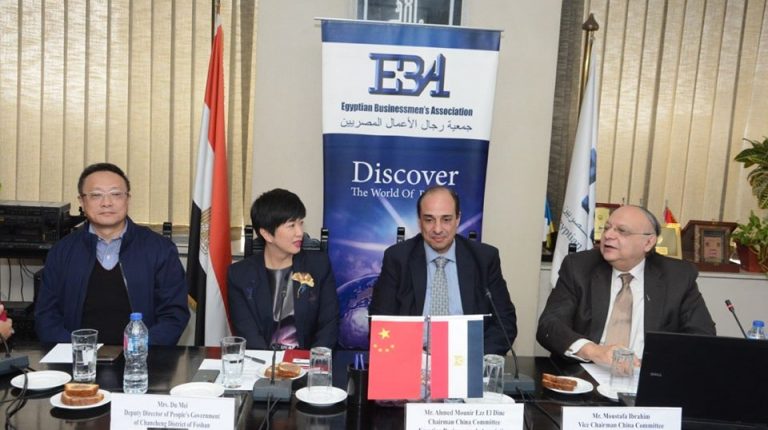 The Egyptian Businessmen Association (EBA) hosted a delegation from Foshan, China at EBA’s premises on Thursday, where both sides  inked a protocol to boost the business and tourism cooperation in the next period.

Deputy head of the Chinese- Egyptian relations development committee at EBA, Moustafa Ibrahim asserted the importance of the protocol due to its expected role in developing several economic sectors in Egypt including textile and furniture through China’s expertise in these key sectors.

EBA is organising a visit to Foshan in 2020 to closely follow up on the signed protocol in Cairo, he noted, asserting that the Foshan’s visit to Egypt included governmental officials. They will be encouraging the private sector to place their businesses in Egypt.

Additionally, trade exchange between Egypt and China reached $10.6bn from January to October 2019, $943m of the trade volume are Egyptian exports to China, according to the annual report released by the Chinese embassy to Egypt in mid-December.

New Chinese FDIs to Egypt focused on the agricultural economy and manufacturing motorcycling, the report mentioned, noting that many Chinese companies working in steel, textiles, waste recycling, and sewage water treatment are discussing with Egyptian counterparts potential investments in the local market in 2020.

Both countries paid great attention to infrastructure projects in 2019, especially in the New Administrative Capital, Suez Canal Economic Zone (SC Zone) in addition to the electric train project, the report added, noting that Chinese companies are actively competing on the country’s various projects in the railways, electricity, roads, and city construction.