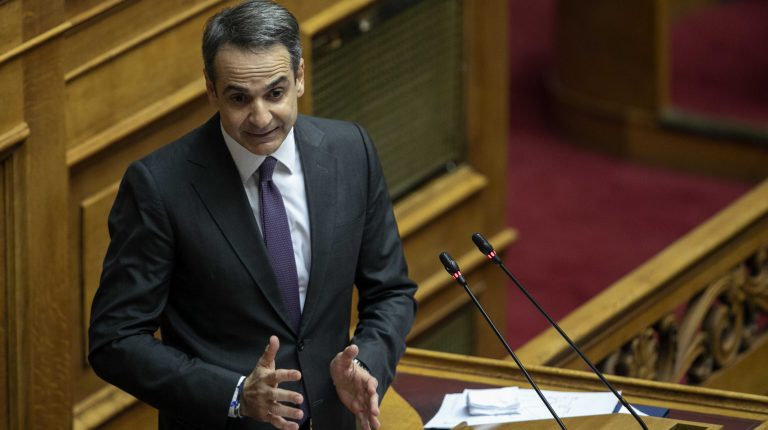 Greece’s Prime Minister Kyriakos Mitsotakis expressed his country’s readiness to turn to the International Court of Justice (ICJ) to settle Athens’ disagreement with Turkey about maritime zones in the Mediterranean if both sides could not end the dispute.

Mitsotakis told To Vima newspaper, “We do not want instability in our neighbourhood. Therefore, we want a say in developments in Libya,” asserting that Greece wants to be part of the solution in Libya, as Libya concerns Greece too. He stressed that Greece wants to attend the UN-backed Berlin Conference on Libya in January.

Berlin conference is to pave the way for a political solution to Libya’s ongoing conflict.

On the ground, some video footage emerged on social media showing Syrian fighters carrying light weapons at a military site claimed to be in Libya. However, the information office of Libya’s Government of National Accord (GNA) said that the video was shoot in Syria’s Idlib city.

The GNA denied on Sunday that Syrian fighters were deployed in Libya and joined its forces in the fight against the Libyan Arab Armed Forces (LAAF), asserting that the GNA will legally pursue “all those who contribute to spreading such lies and fabrications.”

Verified by Google Satellite maps, Libyan sources confirmed that the video was taken in Libya, according to Al-Hadath channel. The sources said that the video’s site was used as a military camp for the GNA’s forces in Salah al-Din neighbourhood, southern Tripoli.

According to the Syrian Observatory for Human Rights (SOHR), Syrian factions affiliated with Turkey opened four centres requiting Syrian fighters to send them to Libya to join the GNA’s force.

Offering salaries that range from $1,800 to $2,000 per month, Turkish-backed factions in Syria allegedly managed to deploy 300 Syrian fighters in Libya, while around 900 fighters were sent to Turkish camps to receive training.

Moreover, Libyan House of Representatives spokesperson Abdulla Belhiq warned that if Turkey were to opt for military intervention, the LAAF will take fierce action and consider such an intervention “a new colonisation of Libya.”

During a parliament session on Saturday, in the presence of the Cypriot Parliament Speaker Demetris Syllouris, the Libyan parliament vowed to plead with the European Union to withdraw recognition of the GNA.

Italy’s Prime Minister Giuseppe Conte warned that Russia and Turkey only seek the military rather than political solution to the Libyan crisis.

Addressing the European Union, he said “We must be united, we cannot allow actors even much more distant from Libya, to position themselves, settle their role in the Libyan scenario and claim the primacy for any solutions,” clarifying that the Russian-Turkish solutions in Libya are the only military.