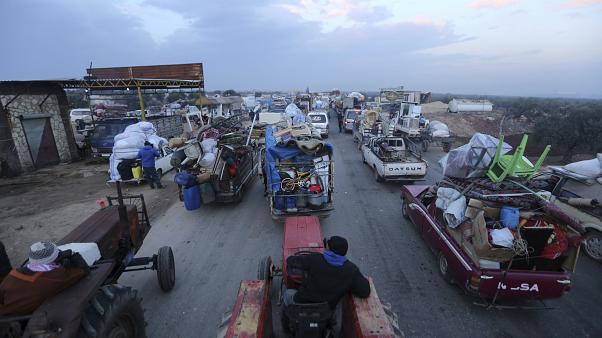 More than 235,000 people have fled their homes in northwestern Syria in the past two weeks alone, the United Nations said on Friday.

The UN Office for the Coordination of Humanitarian Affairs (OCHA) said the latest displacements took place between December 12 and 25, as many people left southern Idlib’s Maaret al-Nouman and other towns in the area.

The OCHA said Maaret al-Nouman — one of Idlib’s largest urban centers — was now “almost empty” as a result of the latest violence.

Syrian President Bashar Assad’s army and its Russian ally have pressed on with an assault on the last rebel stronghold in Idlib despite an August ceasefire deal and appeals for restraint from Turkey, France and the UN.

The increased airstrikes and clashes on the ground have forced thousands of civilians to flee.

French news agency AFP reported that the main highway connecting southern Idlib to the province’s north had been bustling with pick-up trucks ferrying civilians away from the fighting.

OCHA said residents were predominantly moving north to urban centers such as Ariha, Saraqab and the provincial capital, Idlib city, as well as to displacement camps in the province along the Turkish-Syrian border.

In a statement earlier this week, the Syrian army said it had seized 123 square miles (320 square kilometers) from its rivals in recent days.

The fresh displacement follows the movement of some 400,000 people between April and August this year when the government launched its offensive against rebels in both Idlib and nearby Hama. Around 1,000 civilians were killed.

Idlib is dominated by the country’s former al-Qaeda affiliate, Hayat Tahrir al-Sham, whose chief this week urged Islamic fighters and allied rebels to head to the front lines and battle “the Russian occupiers” and the regime.

The region is home to some 3 million people, including many displaced by years of violence in other parts of Syria.