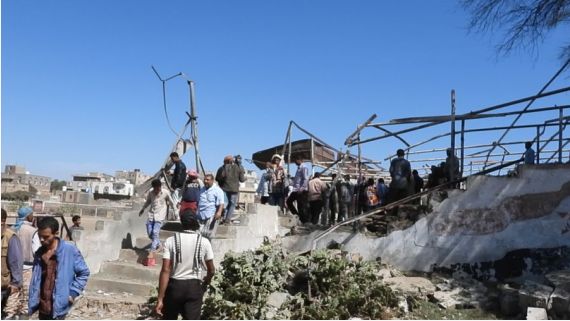 A ballistic missile fired by the Houthi rebels struck a military graduation parade of the newly-recruited forces in the southern Yemeni province of Dhalea on Sunday, a military spokesman told Xinhua.

“The missile hit the guest platform just 20 minutes after the end of the military graduation parade, causing a huge blast,” said Fuad Jubary, spokesman of the newly-recruited forces.

“All the high-ranking military commanders left the sports stadium just minutes before the explosion and hence only soldiers were killed at the scene,” he added.

A security official said on condition of anonymity that earlier medical reports showed around 10 soldiers were killed and some 25 others injured during the blast.

Meanwhile, a commander of the anti-Houthi military forces based in Dhalea vowed a revenge attack against the Houthi-controlled sites in the northern parts of Dhalea in the upcoming days.

“The security forces in Dhalea captured around four collaborators who facilitated the missile attack by providing Houthis with intelligence information,” he said, also on condition of anonymity.

No claim of responsibility was made by the Iran-backed Houthi rebels or their official media networks for the missile attack in Dhalea.

Earlier in the day, witnesses and medics said at least nine people were killed and dozens injured when a blast struck a military graduation parade in Dhalea.

In April, the Iran-allied Houthi fighters launched a series of intense armed attacks on the positions of the Yemeni government forces and succeeded in seizing the district of Al Husha in western Dhalea.

The areas in the north and west of Dhalea, 138 km north of Aden, have been witnessing non-stop fighting between government forces and Houthi fighters for about four years.

Yemen has been plagued by a civil war since late 2014 when Houthi militias forced the internationally-recognized government of President Abd-Rabbu Mansour Hadi into exile.