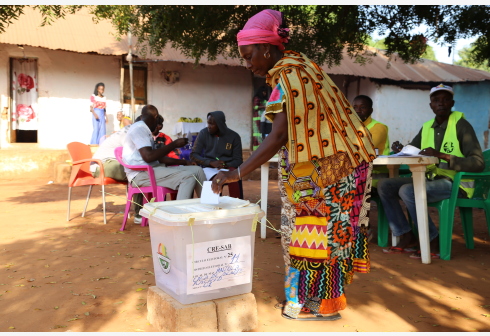 The polling stations will be closed at 5 p.m. local time. Provisional results are expected 48 hours after the closing of polling.

During the first round on 24 November, no candidate won more than 50 percent of the ballots, necessitating a second round.

On 27 November, the National Election Commission (NEC) announced the results of the first round, which showed Pereira of the African Party for the Independence of Guinea and Cape Verde and Embalo of the Movement for a Democratic Alternation won 40.13 percent and 27.65 percent of the votes respectively. Incumbent President Jose Mario Vaz obtained 12.41 percent, which placed him at the fourth place.

For Sunday’s presidential runoff vote, the NEC estimated that more than 100 international observers from the African Union, the Community of Portuguese Language Countries and the Economic Community of West African States (ECOWAS), among others, will be present.

The civil society will also supervise the voting process, according to Silvina Tavares, the spokeswoman of the organizations of civil society.

National police commissioner Armando Nhaga announced that more than 7,000 policemen and ECOWAS troops will be deployed to ensure the security of the voting.

Both Pereira and Embalo said Friday they will respect the results of the runoff.

The presidential election is seen as a key step to end the protracted political crisis that broke out in Guinea-Bissau in 2015 since President Vaz dissolved the then government led by Pereira, his main political rival.

Since its independence from Portugal in 1974, the West African country has struggled with political crises, with only Vaz finishing a five-year term as president.