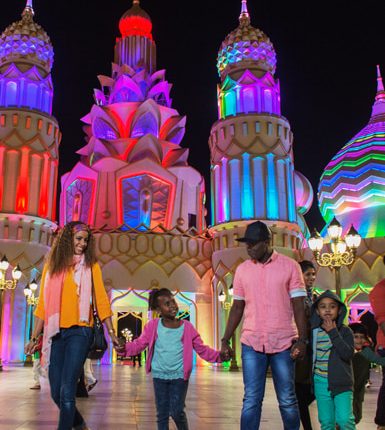 The event attracted more than 20,000 visitors and residents of different nationalities who came to the site to celebrate the launch of this special event.

Thousands of visitors visited the Dubai Fountain Walk in front of the Dubai Mall to enjoy the lights and lasers shows on the façade of the Burj Khalifa, in harmony with the dancing Dubai Fountain, in the tune of the song “Dubai Another Planet,” produced specifically for the 25th festival.

The ceremony was broadcasted through large screens distributed in the outer area of the Dubai Mall to allow everyone to see these wonderful shows, especially as visitors continued to come to the area to witness the opening of the festival from 3 pm until the conclusion of the activities late at night.

Sheikh bin Rashid Al Maktoum had given the starting signal for lights, lasers, fireworks, and the Dubai Fountain, which was followed by an artistic evening hosted by artists Cheb Khaled, Sherine Abdel Wahab, and Hussein Al Jasmi.

Fans of authentic art had the opportunity to enjoy a hologram concert of Umm Kulthum, as Dubai hosted an opera concert in which a group of 20 performers participated. Separate areas around the city saw a number of foreign markets, which welcomed its guests to enjoy shopping, dining, and watching artistic and cultural performances from different parts of the world. The fireworks show started at 9:00 pm at The Beach, La Mer, Al Seef, Dubai Festival City Mall, and Dubai Creek.

Visitors to shopping centres enjoyed promotions that reached up to 90% on more than 1,000 brands in 4,000 shops, in addition to the 12 Hour Sale event, which was launched in a number of shopping centres of Majid Al Futtaim to give visitors discounts of up to 90% to celebrate the launch of the festival.

Thousands of visitors are expected to flock to Tower Park to enjoy the activities of the second day of the opening ceremony, which will include a concert by Liam Payne, member of One Direction band, and singer George Smith.