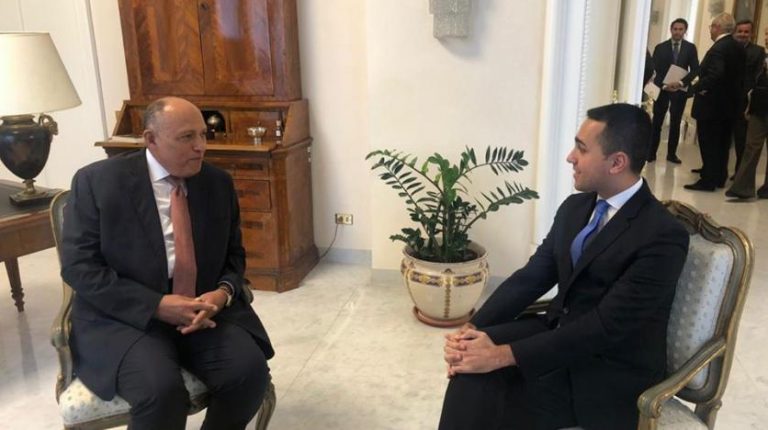 Egypt’s Foreign Minister Sameh Shoukry has agreed with his Italian counterpart Luigi di Maio on rejecting the foreign military interferences in Libya and to seek to restore the stability and security of the war-torn country, according to a ministry statement.

In a phone call on Monday, the two ministers discussed combining efforts to reach a political settlement to the Libyan crisis per Berlin peace conference path which is expected early in the new year.

In the meantime, Egypt’s President Abdel Fattah Al-Sisi has discussed with his French counterpart Emmanuel Macron putting an end to the external interferences in the north African country and the latest developments in Libya, according to an Egyptian Presidency statement.

In a phone call on Sunday, both leaders addressed several regional issues, in particular, Libya’s conflict.

Al-Sisi renewed Egypt’s stance which seeks to restore the stability and security of Libya, support counterterrorism efforts, and undermine militant militias, as well as ceasing illegitimate external interferences in the war-torn country that are escalating the situation.

Macron stated that France seeks to reach a political solution in Libya and cooperate with international partners to resolve the current crisis there.

On the other hand, the leaders also discussed bilateral cooperation and promoting mutual relations.

The situation in Libya has been escalating in recent weeks since Turkey signed its military, security, and maritime border accords with the Government of National Accord (GNA) on 27 November. Egypt, Cyprus, and Greece condemned these accords.

A Cairo summit is expected on the fourth or fifth of January between Cyprus, Egypt, Greece, and with France’s participation. The details of the summit are not yet released, but it is expected to address Turkey’s activities in the region.

The summit will follow a meeting between the leaders of Israel, Cyprus, and Greece in Athens on the second of January to sign an agreement for the construction of EastMed pipeline. The project, which will be completed in 2025, aims to export gas from Israel to Europe and is expected to satisfy about 10% of the natural gas needs of the European Union.

Al-Sisi already made his stance clear regarding the conflict in Libya and warned last month against attempts “to control Libya,” emphasising that Libya’s security is essential to Egypt’s security

The UAE, Egypt, and France have backed the eastern-based Libyan Arab Armed Forces (LAAF), headed by Khalifa Haftar. Meanwhile, Turkey is the GNA’s main supporter. Ankara has previously provided the GNA with military equipment, including armoured vehicles and drones, but it would be a major escalation if it sends ground troops.

Last week, Turkish President Recep Tayyip Erdogan said that lawmakers will vote on 8 or 9 January on a measure to send troops to Libya in support of the GNA.