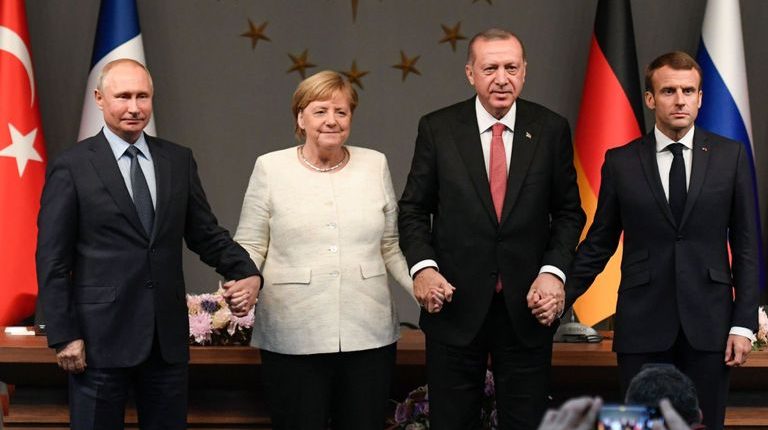 Reuters quoted the government spokesperson as saying “A further exchange was agreed to strengthen diplomatic efforts.”

Turkey’s Directorate of Communications said that during the phone call with Erdogan, Merkel also addressed the Syrian crisis.

On Saturday, Turkey’s foreign minister had warned that the Libyan conflict is at risk of becoming the next Syria, calling for speeding up legislation to allow Ankara to send troops to Libya.

Meanwhile, Kemal Kılıçdaroğlu, the leader of the main opposition Republican People’s Party (CHP) expressed his party’s fierce opposition to any decision that would result in sending Turkish troops in Libya, according to Turkish local media.

Erdogan begun to implement his military intervention in Libya, which has raised international rejection. On that note, Kılıçdaroğlu strongly criticised the government’s motion planned for this Thursday, to vote on sending troops in Libya, a motion he vowed to stand against in parliament.

He asserted that the Turkish “foreign policy lacks depth, history, and experience in the foreign ministry,” explaining that Turkish policy in Syrian and Libyan affairs will only benefit the Brotherhood organisation and will bring Turkey more harm than gains.”

Kılıçdaroğlu also called on the Turkish government to “draw lessons from the wrong policies in Syria and not repeat them in Libya,” asking “What are Turkey’s gains in Syria? Do you win or lose? Even ordinary people on the street will tell you how wrong they are.”

Moreover, the Syrian Observatory for Human Rights (SOHR) said on Sunday that Syrian fighters from militant organisations recruited by Ankara have already arrived in Libya’s capital, Tripoli, to fight for Turkey in return for attractive salaries.

One day after the SOHR reports, Egypt’s the fatwa observatory at Dar al-Ifta’ al-Misriyyah warned against the danger of new waves of terrorism in the region, as Turkey is working to send terrorist groups in Libya, in order not to incur losses among its soldiers.

On the other hand, Turkey continues to ramp up efforts in order to strike deals with nations on the Mediterranean, holding exercises with the Algerian navy.

Turkish Naval Forces have dispatched two frigates toward the port of Algeria to provide associated support to NATO’s Operation Sea Guardian, after completing the passing exercise with the Italian frigate Zeffiro. The two frigates will remain in Algeria’s waters for four days starting from 7 January, reported the Turkish Ministry of National Defense.