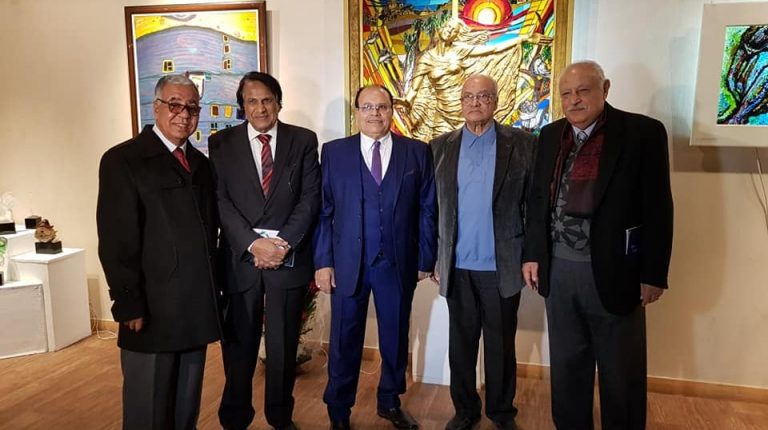 The exhibition was held under the patronage of Minister of Culture Enas Abdel-Dayem, while artist Farouk Hosny, former culture minister, and Mohsen Salah, CEO & Chairperson of Arab Contractors, participated in the opening of the event.

The exhibition showcases 60 works of art by Zenhom, combining large-space panels up to 2m x 2m with lead-fired glass processing, polyester sculpture, wool, and glass masses. The exhibition also includes works of glass sculpture, and glass-coloured photography, or what is known as “glass painting”.

Zenhom is considered one of the pioneers of architectural glass art in Egypt, presenting his own vision in life, as the art pieces displayed include a painting reflecting life amid destruction. He expressed it by portraying the Egyptian man as victorious, capable of continuing his life after his fight against terrorism.

The exhibition also includes works focusing on originality and modernity, in which heritage was employed in the internal and external architecture in accordance with the latest developments of the era. Among them is the dome of Al Nour mosque in Abbasiya, which was made of glass, in addition to the dome of the Hilton hotel, the glass and ornamental ceilings of the political Economy and International Law Association, the wall of the Constitutional Court, the ceiling and the opening Al Sayeda Zeinab mosque in Cairo and Ali Zain Al-Abidin mosque, in addition to the restoration work on Al-Hussein mosque.

This included Al-Azhar, Sayda Zeinab Mosques, and many others. He also beautified the Aswan and Luxor airport and restored facilities that no one has worked on before, including the Fifth Settlement tunnel and others.

He also headed large restoration groups containing professors and students from a mixture of arts, monuments, and architecture specialties.

Mohamed Zenhom, who holds PhD in adornment of glass, presented many art works over fifty years. It moved from being local to being regional and even international, presenting works of art in a manner that suits the countries in which they were created. It is a school of creativity, boldness and innovation, combined with the beauty of the past, the modernity of the present, and the speed of contemporariness.

After the age of 60, it seems that it would have been better for him to retire and enjoy the history he created, but instead, he went on to establish a scientific platform by which he can complete his journey. The Arab Society for Civilization and Islamic Arts, the largest association of arts, architecture, and humanities in the Arab and Islamic world, aimed at promoting scientific research in the field of arts, architecture, and cooperation in order to enhance the Arab world.

Zenhom became head of the glass department, and after the age of 60, the Arab Society for Islamic Arts was established and he became part of its Board.