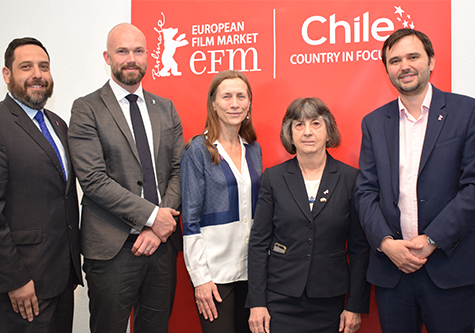 The Berlin International Film Festival announced on Friday that during its 70th edition Chile will be the “Country in Focus” at the European Film Market (EFM), as Chilean filmmakers and filmmaking will be present to reflect and discuss the film industry in their country, as well as screen their work.

The market’s programme, the festival said, will provide many opportunities to network with Chilean producers, distributors, investors, creators, and to get to know Chilean productions.

EFM’s “Country in Focus” programme was launched in 2017 and aims, according to the website description, to present, in depth, the filmmakers and film industry of a country and offer them a special platform.

Chilean cinema has always been present at the Berlinale and has received numerous awards, testifying to the success of Chilean filmmaking – as in recent years the Silver Bears for world-acclaimed films such as Gloria and Una mujer fantástica (A Fantastic Woman) by Sebastián Lelio, who was also a member of the International Jury in 2019. Furthermore, outstanding and award-winning films with important themes like El Club (The Club) by Pablo Larraín and El botón de nácar (The Pearl Button) by Patricio Guzmán have contributed to the history of Chilean cinema at the Berlinale.

With Mexico, Canada, and Norway as “Country in Focus” in previous years, Chile will be the first South American country to be featured in the  programme of the European Film Market, the festival said in a statement.

“I am pleased that our long-term positive relations with Chilean filmmakers will be further developed through the cooperation of the ‘Country in Focus’ programme”, Berlinale Director Dieter Kosslick said.

“Chilean cinema has a long tradition at Berlinale, which we absolutely want to continue,” Executive Director of the Berlinale, Mariette Rissenbeek commented during a press conference.

During the conference EFM Director Matthijs Wouter Knol said that “Chile’s presence at the EFM and other Berlinale industry initiatives has grown steadily over the last few years, and the creativity of Chilean cinema has once again been confirmed internationally with the Academy Award for Una mujer fantástica.”

Chilean Minister for Culture Consuelo Valdés Chadwick said the Chilean audiovisual industry is experiencing one of its best moments, adding that the different awards and recognitions are proof of Chile’s excellent reputation.

The main challenge, the minister pointed out, is to support and deliver the necessary tools to creators so they may continue to progress and make their work visible even beyond borders. “Therefore, this milestone that brings us together today, the celebration that next year Chile will be the first South American country to be invited as a ‘Country in Focus’ of the European Film Market of the Berlinale, is an incentive to continue supporting our cinematography,” he added.