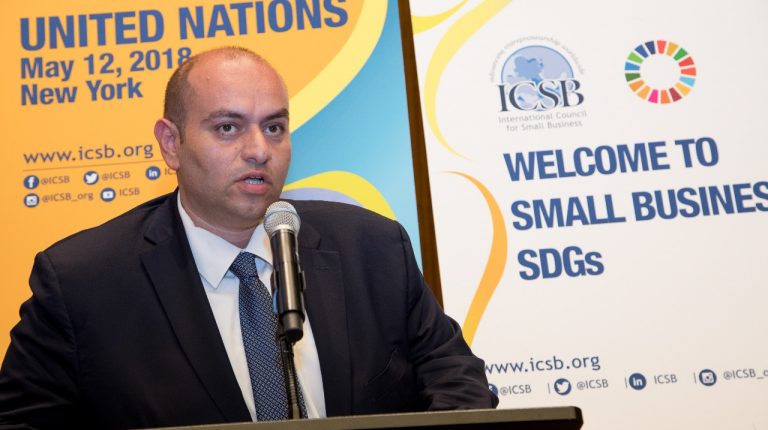 The International Council of Small Businesses (ICSB), founded in 1955, is the oldest and largest non-profit organisation devoted to small businesses internationally. It is a US-based platform that provides knowledge on small business management and entrepreneurial development.

In June, Ahmed Osman was chosen as the first Egyptian to hold the position of president and CEO of the ICSB. A step that reflects Egypt’s excellence in business climate development and small businesses. Daily News Egypt interviewed Osman about the role of small enterprises in economy, and Egypt’s micro, small, and medium enterprises (MSMEs) draft law.

What is the ICSB and its role?

The ICSB is composed of 6,000 members, including specialised policy makers, academics, business leaders, entrepreneurs, and researchers in the field. It has presence in more than 55 countries around the world. Over the past period, it has played a major role in the adoption of several SMEs policies in some countries, including South Korea, Brazil, and the US.

What are the objectives of the ICSB?

It aims to provide technical support to all countries in the field of SMEs, secure financing channels to entrepreneurs, enhance the role of SMEs across the world, offer advisory opinion on the laws related to the sector in different countries.

The ICSB, which works as a partner of the United Nations, aims at creating 600m job opportunities in this sector worldwide over the next 10 years.

What is the Council’s frameworks?

The ICSB works on three main themes. First, technical support to different countries in developing policies and laws that will regulate the SMEs sector and entrepreneurship. Second, education and capacity-building for entrepreneurs, and finally, the establishment of many different initiatives, whether financial or marketing.

Has the Egyptian government supported you in the ICSB presidential election?

Of course, winning the election was not the result of my efforts only, as the Egyptian state has supported me for the position. The positive economic actions that Egypt has been working on since President Abdel Fattah Al-Sisi took office were also supportive in the election, as Egypt has been recently focusing on the SMEs sector.

How do you see the role of SMEs in Egypt’s economic reform programme?

Egypt has now become the world’s focal point of attention, especially after its successful economic reform programme. The talk about SMEs is already a reality in Egypt, not just talk. The only way to create new jobs for young people is through micro and small-enterprises.

About 90% of the world’s economies are based on SMEs, whether in formal or informal economies, so we are pleased to launch an electronic platform next January to fund entrepreneurs in the form of participatory finance.

How do you see Egypt’s micro, small, and medium enterprises (MSMEs) draft law?

The MSMEs draft law aims to integrate the informal sector within the formal one, which is a really important step. However, it should be more flexible, with fewer articles, as there are 109 articles in nine sections. It should also be free from complications related to taxes and insurance.

Any owner of a small enterprise wants to work and make profit, so we should simply tell them what they own and what they owe to the state.

How can informal businesses be more integrated into the formal market?

Informal businesses constitute a large proportion of the Egyptian economy. Integrating this sector in the formal market can be very important to the economy through several steps.

What are these steps?

First of all, the state should expand health insurance and pensions to cover small entrepreneurs, simplify and end intransigence in business establishment procedures, and unify tax and insurance policies.

What is the role of entrepreneurship in encouraging young people to do business?

Leading a business is one of the most desirable areas for young people, as they want independence. Some say that entrepreneurship will be the only profession for young people, and this is completely wrong because 80% of entrepreneurs fail in their projects, and this is why business incubators were created. There are 650 business incubators in Africa led by governments and the private sector, of which 110 ended their businesses last year as a result of being financed by temporary grants or bankruptcy.

Does this entrepreneurship development depend only on governments or also on the private sector?

If the private sector is harmed, there is no future for Egypt’s economy. The problems of SMEs are the same all over the world. In addition, the government with its various sectors implements the same mechanism to support these projects but without communication between them, which slows the processes of supporting SMEs. In 2016, we presented an idea to the Egyptian government to create a special state entity to support the sector. Unfortunately, things have not gone as intended, and this does not diminish the massive state support for SMEs. The Egyptian state has been interested in the SMEs sector for the past four years. It has a leading experience in microfinance. The ICSB supports Egypt to establish the first university in entrepreneurship and small businesses to be launched by September 2021.

What about investing in Africa?

Africa is the continent of opportunity, but these opportunities need more efforts and work to be exploited.

The continent is witnessing a lot of efforts recently in the field of infrastructure, but we need to empower entrepreneurs to ensure a better life for the African citizen. Studies say that in 2040, 50% of the world’s youth will be from Africa, so big companies must invest in the continent to prevent young people from abandoning their continent. This may cause major problems in the future.

Is the existing funding for SMEs in Africa and Egypt sufficient?

Of course not, the SMEs funding in Africa was $800m in 2018, which is very small, and is almost the same of a single country like Spain.

In Egypt, large enterprises are cooperating with the Egyptian government to finance small projects. The World Bank has allocated $200m to finance SMEs in Egypt.

Talks to use Industry Ministry’s untapped lands to launch SMEs