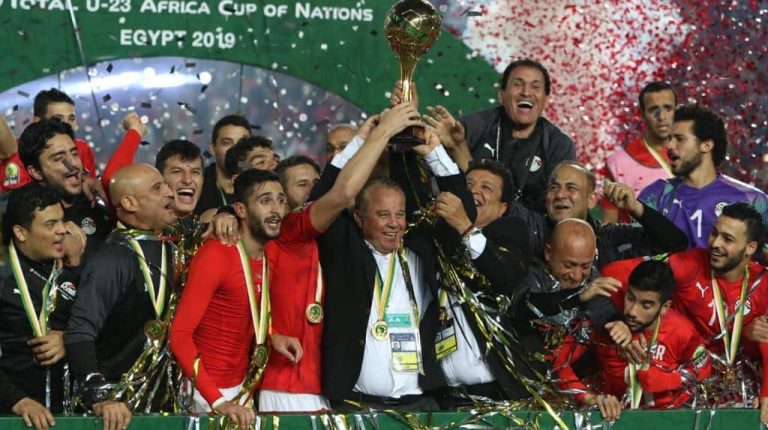 Egypt is anticipating several important sports events in 2020 after last year’s great local, regional, and international achievements. The first major sports event in Egypt this year will be hosting the 2019 CAF Awards, to be held in January in Hurghada. Later on, Egypt will take part in the Summer Olympics in Tokyo. Several Egyptian athletes in different games have qualified to Tokyo 2020, including swimming, shooting, modern pentathlon, table tennis, and football.

For the first time, Egypt will host CAF Awards for the Best African Player of the Year in 2019 on Tuesday 7 January, on the Red Sea shores of Sahl Hasheesh, Hurghada.

The event will witness the attendance of African football legends and senior officials. There will be several award categories in recognition of exceptional contributions to African football. The CAF, led by Ahmad Ahmad, granted Egypt the right to organise the special event to continue its successful organisation of major continental competitions last year, including the Africa Cup of Nations (AFCON) and U-23 AFCON, which Egypt has won for the first time in history.

Egyptian football star Mohamed Salah was shortlisted for the Best African Player of the Year along with his colleague in Liverpool, Senegalese Sadio Mane, and Algerian Riyad Mahrez, who plays for Manchester City.

Al Ahly have eight Champions League titles and aim to won their first African trophy since 2013, while the White Knight have five titles the last of which was in 2002. Both teams had good results in the groups stage of the competition so far.

In the CAF Confederation Cup, which Zamalek won in 2019, Al-Masry and Pyramids were drawn in the same group, and both of them have greater chances than their competitors to qualify to the next round.

In the Arab Club Championship, Ismaily will face Al Ittihad Alexandria in the second leg of the quarter-finals on 24 January. Both Zamalek and Al Ahly had won the Arab title in 2003 and 1996, respectively.

Egypt will participate in the 24th edition of the African Men’s Handball Championship that will take place in Tunisia from 15 to 25 January.

The national team played two friendlies against Serbia on 28 and 29 December 2019, in preparation for the African Men’s Handball Championship.

The Egyptian national volleyball team missed their chance to qualify to the Tokyo Olympics through the Friendly International Championship held in December in Bulgaria, after they were ranked third in Group A of the competition. However, the dream of qualifying to Tokyo has not end yet, as Egypt will take part in the men’s Africa volleyball Olympic qualifying tournament, which starts in Cairo from 7 to 11 January.

The African Volleyball confederation (CAVB) confirmed that only five countries out of 54 states in the continent have been cleared to contest for the single slot for the 2020 Tokyo Olympic Games.

In addition, the women’s Olympic Games qualifiers for Africa will be held in Yaounde, Cameroon from 3-10 January. Egypt will face off hosts Cameroon, Kenya, Algeria, Morocco, Botswana, Rwanda and Mauritius for the one slot reserved for Africa.

Egypt will host the first African Para Games from 23 to 31 January.

Around 768 athletes from 43 African countries are expected to attend the continent’s main Para sport competition and compete across Africa’s four most-practiced Para sports. Most of the events will act as qualifiers for the Tokyo 2020 Paralympic Games, set to be held between 25 August and 6 September.

African Para Games will coincide with the end of Egypt’s presidency of the African Union (AU) which reflects the country’s increasing support to the people with disabilities.