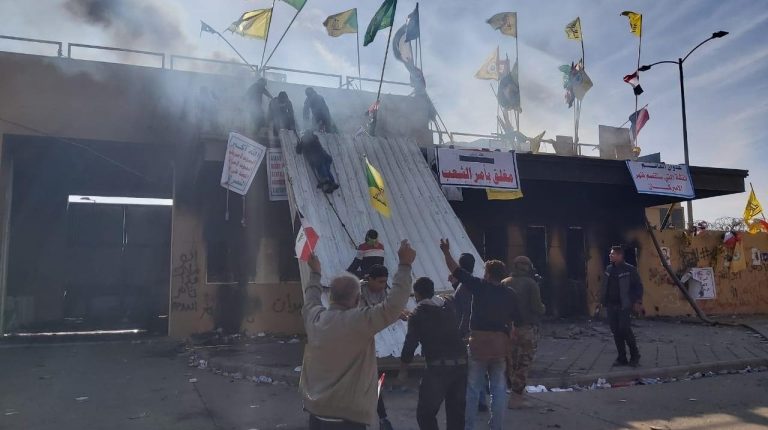 Clashes in front of the US Embassy in Baghdad continued on Wednesday for the second day in a row after supporters of the Iran-backed Popular Mobilisation Forces (PMF) threw stones at the Embassy, while security forces fired tear gas and stun grenades at the crowd.

Meanwhile, Iran’s Supreme Leader Ayatollah Ali Khamenei had strongly condemned US attacks on the Iran-allied Kataib Hezbollah militia group in Iraq which killed 25 and wounded 55 on Sunday. Iranian state TV quoted Khamenei on Wednesday as saying, “the Iranian government, nation, and I strongly condemn the attacks.”

He also denied Iran’s responsibility for the attacks on US forces in Iraq tweeting, “again that guy (Trump) has accused Iran for the attacks. You cannot do a damn thing. If you were logical, which you are not, you would see that your crimes in Iraq and other countries have made nations hate you.”

“If Iran decides to confront a country, we will do that openly. If anyone threatens our nation’s interests we will fight back, without any hesitation.”

On the other hand, the US vowed on Tuseday to deploy 750 additional troops in the Middle East, at the discretion of President Donald Trump, as a response to the US Embassy attack on Tuesday, according to Defense Secretary Mark Esper.

Provoked by the US air raids against Kataib Hezbollah on Sunday, hundreds of protesters stormed early on Tuesday the US Embassy in Iraq, setting fires and chanting “Death to America.”

Demanding to withdraw US troops from Iraq, protesters attacked the embassy, throwing stones and torching a security post at the embassy, which started a confrontation with embassy guards who used stun grenades and tear gas to repel protesters.

Reacting to the attack, the US president said that Iran would be held “fully responsible for lives lost, or damage incurred, at any of our facilities,” stressing that Iran “will pay a very big price, this is not a warning, it is a threat,” he wrote on Twitter.

Later, Trump said that he doesn’t want war but that if it comes to conflict, Iran wouldn’t last long, adding that “I don’t think that would be a good idea for Iran.”

As the night fell, protesters had set up tents near the embassy, suggesting another day of demonstrations. On Wednesday, they started to bring food supplies, in addition to cooking equipment. Although senior Iraqi army officers tried to negotiate with the protesters to leave, the protestors were resolved in continuing demonstrations.