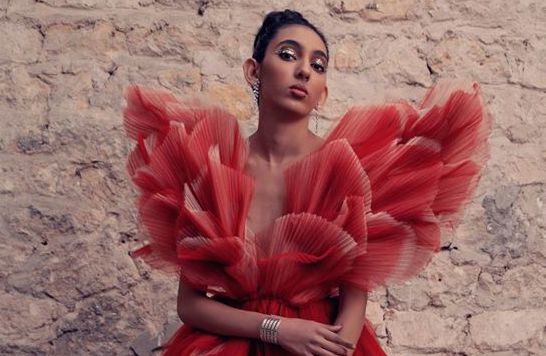 With the 21st century’s pace constantly gaining momentum and demanding longer hours of work, creatives are often the first to dance too close to the flames. After battling with the agony of depression and creative blocks, one designer chose to make his personal struggle and victorious come back a wearable tale to be admired and shared.

Maison Saadi’s latest haute couture collection – De l’ombre à la lumière – is an honest narrator of the past two years, which witnessed the designer’s journey from complete darkness to light. According to Ahmed Saedi, the designer of the line, this collection is the closest to his heart as it represents a personal achievement.

The dreamy collection translates the designer’s notion with contemporary wings, symbolic eyes, and striking silhouettes. Despite depending on dainty materials such as tulle and chiffon, the gowns are eloquently expressive and powerful.

At the forefront of the collection, Saedi’s star design is a red gown with sharp pleats, strikingly dramatic shoulders and empowering presence. In parallel, a certain white and beige ensemble matches an optimistic fluffy high-low tutu skirt with an intricately embellished top, which is decorated with a centered eye as an ode to the importance of looking forward.

With that in mind, the collection embraces a light colour pallet in general. Between a white gown with a corset top and an over-the-top pink gown with dramatic pleated combo of wings and tail; De l’ombre à la lumière is loud, robust, and articulate.

Originally an engineer, Saeedi has always been attracted to fashion ever since a young age. Therefore, his transition to fashion naturally took place in 2012, when he unleashed his postponed design capabilities to concoct his debut collection.