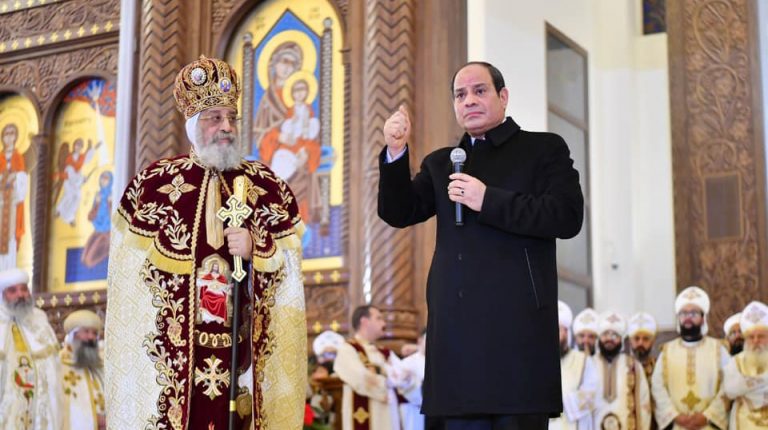 Egypt’s President Abdel Fattah Al-Sisi urged Egyptian Muslims and Christians on Monday to look at the ongoing crises in the Middle East region, and avoid falling into “the same tough conditions.”

“I see that Egyptians are worried. Do not feel worried. As long as we are united, no one can hurt us,” Al-Sisi told worshippers during a Coptic Orthodox Christmas Eve mass in the Nativity of Christ Cathedral, at the New Administrative Capital.

The president was referring to Turkey’s bill that allowed the government to deploy troops to Libya in support of the Government of National Accord in Tripoli.

Al-Sisi previously warned against attempts “to control Libya,” emphasising that Libya’s security is essential to Egypt’s.

Al-Sisi also stressed the need to be united, saying that Egyptian Muslims and Christians are equal in duties, and rights.

“If you love God, you have to love each other. I am not addressing a specific sect, but all of us. Do not allow anyone to drive a wedge between us and incite strife. This country is homeland for all of us.”

“We are all equal. No one has privilege over another,” Al-Sisi said.

Egypt’s Coptic Orthodox Christians were celebrating Christmas eve on Tuesday, which is a national holiday.