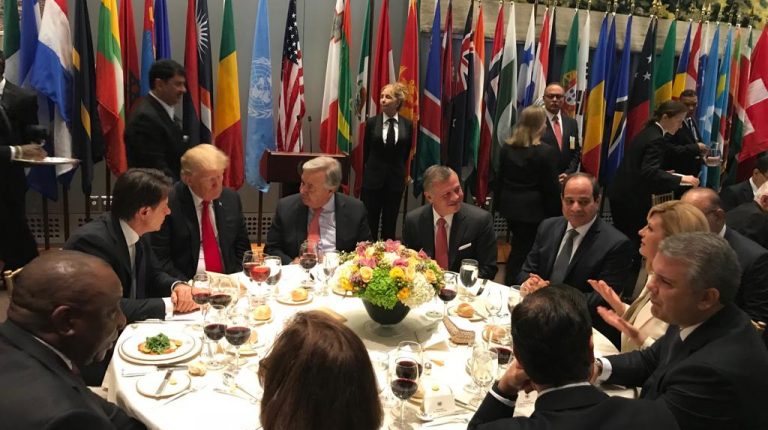 The year 2020 began with tensions and tough events in the Middle East and North Africa Region which puts Egypt’s foreign policy under spot. The events included Turkey’s parliament passing a bill that allows the government to deploy troops to Libya to intervene in the civil war in addition to the US killing of Qasem Soleimani, a top Iranian general and one of Iran’s most powerful men.

Daily News Egypt digs deep to inspect the directions of Egypt’s foreign policy in 2020, in light of recent updates and presidential visits in 2019.

President Adel Fattah Al-Sisi made very important visits in 2019 that will positively reflect on the country’s foreign relations with its partners in 2020.  Gamal Bayoumi, former assistant minister of foreign affairs and secretary general of the Arab Investors Union, told DNE that, “the great power that Egypt had from its presidency over the AU in 2019 will continue to strengthen its African dynamic role.”

Al-Sisi made 20 foreign visits in 2019, according to past presidential statements. Africa seized very important portion on the visits. On 11 February 2019, Al-Sisi visited Addis Ababa, Ethiopia to participate in the takeover presidency of AU. He also visited Guinea on 7 April before visiting Côte d’Ivoire on 11 April. He also made an African tour in May that included 4 countries, Zambia, South Africa, Angola, and Congo.

Egypt will continue to exercise its leading role in the United Nations (UN) in 2020,  Bayoumi said, noting that Al-Sisi makes sure to participate in all UN General Assembly (UNGA) meetings since assuming power in 2014 to highlight Egypt’s role in the Middle East and North African (MENA) region.

Notably, Al-Sisi visited New York city for his sixth participation in the 74th UNGA in September 2019, where he held a number of meetings with his counterparts and UN officials to discuss the means of developing cooperation and tackling issues of common interest.

Egypt’s foreign policy in 2020 will also continue to promote the role of the League of Arab States (LAS) especially due recent major developments in the region including in Yemen, Iraq, Libya, and Syria, Bayoumi noted.

Bayoumi said that Egypt will continue to be a very important partner to the European Union (EU), asserting that the EU-Egypt Association Agreement, which started back in 2004, is one of the most important agreements for Egypt as it creates a free-trade area between the EU and Egypt by removing tariffs on industrial products, and making agricultural products easier to trade.

Foreign Affairs Ministry’s role and presence in the world

Bayoumi also called on the Ministry of Foreign Affairs to expand its presence in the world, yet he said that Egypt implements very successful foreign relations with a very modest budget in comparison to other countries.

“The Ministry of Foreign Affairs (MOFA)employs less than 6,000 people, which is very low. The United States’ embassy to Iraq includes 14,000 people. Egypt’s Foreign Affairs Ministry has to hire more diplomats and open embassies in more countries to strengthen its relations with the world,” Bayoumi said.

Egypt’s Ministry of Foreign Affairs released its annual report on the country’s foreign policy on 30 December where it asserted its vision to continue defending national interests abroad by reviewing and analysing the ministry’s efforts, action plans, and goals in 2019.

MOFA will continue to develop and follow up the executive mechanisms of policies and directives issued by the political leadership, in a manner that realises the national interests of the Egyptian state and meets the aspirations of the Egyptian people, the report reassured.

Egyptian diplomacy abroad is based on the positive internal developments and the priorities of the government’s work programme between 2018 and 2022, on top of which is achieving comprehensive development by increasing the rates of economic growth, attracting more foreign direct investment, and reducing unemployment, as well as developing the performance of all sectors and institutions of the state, the report mentioned.

MOFA intensified its efforts in 2019 to secure national goals in light of developments in Arab and African regions in addition to Europe and Asia, the report noted, asserting the successful presidency of Egypt to the AU in 2019, according to the priorities that were set before the year began.

Egypt called for an emergency meeting of LAS Arab Foreign Ministers to discuss Turkish aggression in Syria in October 2019.  The meeting condemned Turkish aggression against Syria as a violation of the principles of the United Nations Charter and Security Council resolutions calling for preserving the unity and independence of Syria, according to MOFA’s annual report.

Egypt can play an important role in re-constructing Syria in the years to come, Rakha Ahmed, former assistant minister of foreign affairs said, noting that Egypt’s situation regarding the Syrian case was very balanced in 2019.

Syria is expected to start a step towards recovery in 2020, he said, adding that Iran’s negative role in the region is very complicated, especially in Iraq, Yemen, Syria, and Lebanon.

Iran’s interference in the Arab region negatively affects its economy as it coincides with US restrictions, Ahmed mentioned, noting that economic growth, unemployment rates, and energy prices became a crisis in Iran.

“Iran won’t get in a war with the US in 2020. The US only wants to limit Iran’s role in the region. I expect Iran to violently respond to the violent actions in Iraq,” Ahemd mentioned.

Iran’s military commander  Qasem Soleimani, a top general and one of the most powerful men in Iran, was killed in a drone strike at Baghdad airport early Friday. The deputy head of an Iran-backed Iraqi militia was also killed.

“The US just spent $2 trillion on military equipment. We are the biggest and by far the BEST in the World! If Iran attacks an American Base, or any American, we will be sending some of that brand-new beautiful equipment their way…and without hesitation,” President Donald Trump said on Twitter on Sunday.

The Turkish Parliament on Thursday, dominated by President Recep Tayyip Erdogan’s AK Party, voted in favour of a bill allowing Turkey to send troops to Libya based on an agreement with Sarraj, whose government is not recognised by the Libyan parliament, Libyan Arab Armed Forces (LAAF) and many countries, especially Egypt.

The Egyptian Foreign Ministry released a statement to highlight the blatant violation of the Turkish parliament’s move to all the international accords and UN Security Council (UNSC) resolutions, especially the 1970 resolution, issued in 2011, which created the Libya Sanctions Committee, banned any arms supply to and from the country, and restricted military cooperation with the war-torn North African country unless such actions were approved by the committee.

“Turkey’s moves in Libya aren’t acceptable for Egypt and for the international community. The Sudanese and Libyan boarders are of great importance to national security for Egypt. I agree entirely with the situation in Egypt regarding recent developments in Libya and Turkey,” Ahmed noted.

“I think that the GERD will continue to seize a huge attention of Egypt’s foreign policy in 2020,” Ahmed said, adding that the current US sponsored negotiations on the dam are good, yet he expected an agreement between the three sides to take more time to reach.

Sudan will not allow the GERD to harm Cairo, Sudanese Prime Minister Abdalla Hamdok said on Thursday, adding “our stance on the dam is the same as Egypt’s, and we are with [Egypt] in every step.”

Interestingly, the three countries agreed on 6 November to set a deadline of 15 January by which to reach an agreement. If there is still no agreement by this date, other countries will be asked to step in and formally mediate the dispute.

For his part, Bayoumi mentioned that Ethiopia isn’t a good negotiator, asserting that Egypt has the full right to defend its share of water because it is a national security issue, noting, “personally, I can’t understand Ethiopia’s situation. I think it’s a political stubbornness.”

All eyes on UNSC as world leaders discuss GERD dispute

Death sentences for Brotherhood members are pending, will not be carried out in this collective manner: Amr Moussa