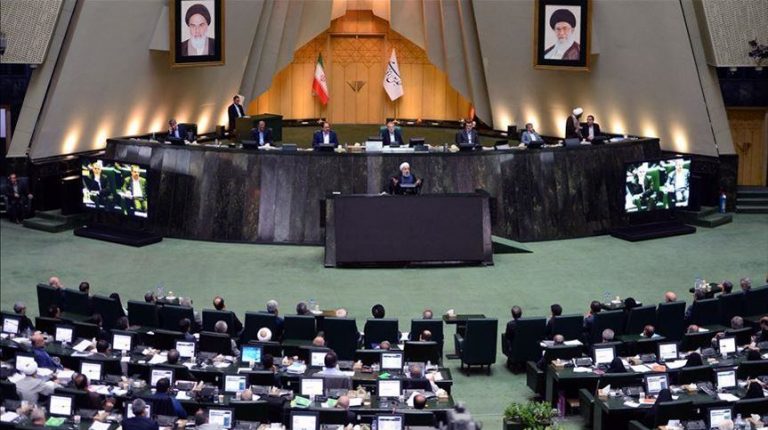 Iran’s parliament passed a bill considering all United States’ forces “terrorists” in response to the killing of Qasem Soleimani, the head of Iran’s Revolutionary Guard foreign operations arm, by US drone strike on Friday.

On Tuesday, a massive number of Iranians gathered for Soleimani’s burial. With large crowds turning out in the hometown of Soleimani, his funeral turned into a stampede killing 35 people and injuring 190 others, forcing his burial to be postponed, Iran’s ISNA news agency reported.

Eyewitnesses described scenes of “mass panic” as thousands of people converged in the city. The general’s flag-draped coffin was making itself slowly along the streets of the city of Kerman when the deadly stampede broke out.

Ratcheting up tensions between the US and Iran, Iran’s “terrorists” bill, passed in parliament, included all US forces, Pentagon employees, agents, and commanders, in addition to those who ordered the “martyrdom” of Soleimani.

“Any aid to these forces, including military, intelligence, financial, technical, service or, logistical, will be considered as cooperation in a terrorist act,” the parliament said.

In April, Iran adopted a law that declared US as a “state sponsor of terrorism”, while describing its forces in the region as “terror groups,” as a response to the US actions in designating the Revolutionary Guards a terrorist organisation.

Meanwhile, Egypt’s Ministry of Civil Aviation said on Tuesday that it suspended flights to Baghdad’s international airport starting on Wednesday until Friday due to the security situation.

Moreover, Germany announced that it would reduce the number of its small troops stationed in Iraq, by moving some of them to neighbouring Jordan and Kuwait. The transfer will mainly apply to soldiers stationed in Iraq’s capital Baghdad and northern city of Taji.

The German military contingent in the country will be “temporarily thinned out,” with around 30 out of the 130 personnel serving in the country to be redeployed to neighbouring countries, Foreign Minister Heiko Maas and Defence Minister Annegret Kramp-Karrenbauer said in a letter to their ministries.

Roderich Kiesewetter, a lawmaker with Chancellor Angela Merkel’s party, who is on the parliament’s foreign affairs committee, told Deutschlandfunk radio that, “temporary reduction” will mean that “about 30 (soldiers) will be pulled out of Taji and a few out of Baghdad,” for a total of between 30 and 40.

He said that removing these troops was “a very good step to give the Iraqi government time to evaluate the situation” after Iraq’s parliament called for the withdrawal of foreign troops. The international coalition fighting the Islamic State group will have to discuss how to proceed, he added.

Iraq’s parliament voted on Sunday for anti-IS coalition soldiers to leave the country following the fatal drone attack on Soleimani. However, the US Defence Secretary Mark Esper announced on Monday that the US military has no plan to “leave Iraq.”

After the US general’s letter told the Iraqi government that troops were preparing to depart from Iraq, Esper denied the reports saying that the “letter is inconsistent with where we are right now.”

The letter was sent by the US military’s Task Force Iraq, by Brigadier General William Seely, to the head of Iraq’s joint operations command, informing him that US-led coalition is preparing for “movement out of Iraq.”

Commenting on the letter, Esper said “There’s been no decision whatsoever to leave Iraq,” explaining that the US remains committed to the campaign to defeat the IS group in Iraq and the region.

On the other side, US President Donald Trump told EIB Network that killing Soleimani should “have been done for the last 15 to 20 years, him in particular. He was their (Revolutionary Guard) real military leader. He’s a terrorist.”

Referring to the Iran nuclear deal with US former president Barack Obama, Trump said “He (Soleimani) was designated a terrorist by President Obama, and then Obama did nothing about it except give them (Iran) $150 billion and even more incredibly, $1.8 billion in cash.

Turkey hits back after new mortar fire from Syria